Firefighters cut through the hull of an overturned crab boat to rescue three crew members Tuesday night at the entrance to Coos Bay, Ore.

A Coast Guard MH-65 Dolphin helicopter crew on a routine training flight spotted the 38-foot Pacific Miner struggling in heavy seas, before its halogen deck lights suddenly disappeared. Shortly after getting a radio message from the air crew, the Sector North Bend command center got notification that the Pacific Miner’s EPIRB was activated and transmitting from the submerged boat.

Two 47-foot motor lifeboats were launched to search for the crew, and the Hauser Fire Department mounted a search along with the North Bend Fire Department, Coos County Sheriff’s Office and state police. More than three hours later the boat was located upside down near the tip of the north jetty at the bay entrance. 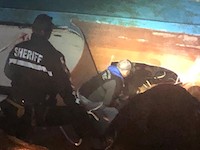 Firefighters used a reciprocating saw to hack into the overturned hull of the Pacific Miner. North Bay Fire District photo.

Searchers heard the crew yelling from inside the wave-battered boat. Firefighters used safety lifelines to descend the rocks and listen the men banging inside the hull.

A battery-powered reciprocating saw was used to hack through the hull, and the crew were helped out and up the jetty rocks by first responders. All three men emerged in stable condition and were transported to the hospital, according to North Bay Fire District Chief James Aldrich.