The dangers associated with operating in cold water are well known to fishing vessel crews across the world. Even with vessels that are built to last, accidents happen and crews can find themselves in situations where safety isn’t about compliance or requirements. Instead, a certain piece of gear or equipment can prevent the loss of life. 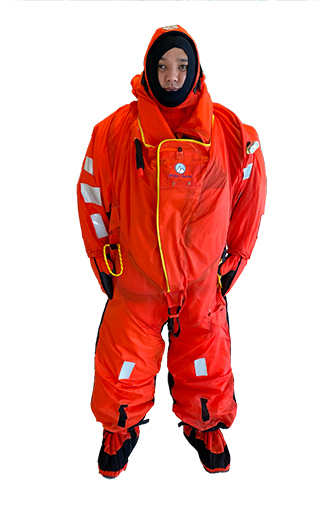 White Glacier was formed to create products that would do exactly that. Founded to develop the type of gear that could save lives when needed in an emergency, the company has produced millions of critical life-support items that have been utilized in countless emergency situations.

That commitment has been taken to the next level with the creation of the new Arctic 10+ Survival Suit, which acts as a thermally-protected, personal life raft in the water and personal habitat on ice or land. Exceeding established safety requirements to positively impact survival times, the Arctic 10+ is a different kind of Survival Suit, with multiple configurations that can make a critical difference in emergency and survival situations. 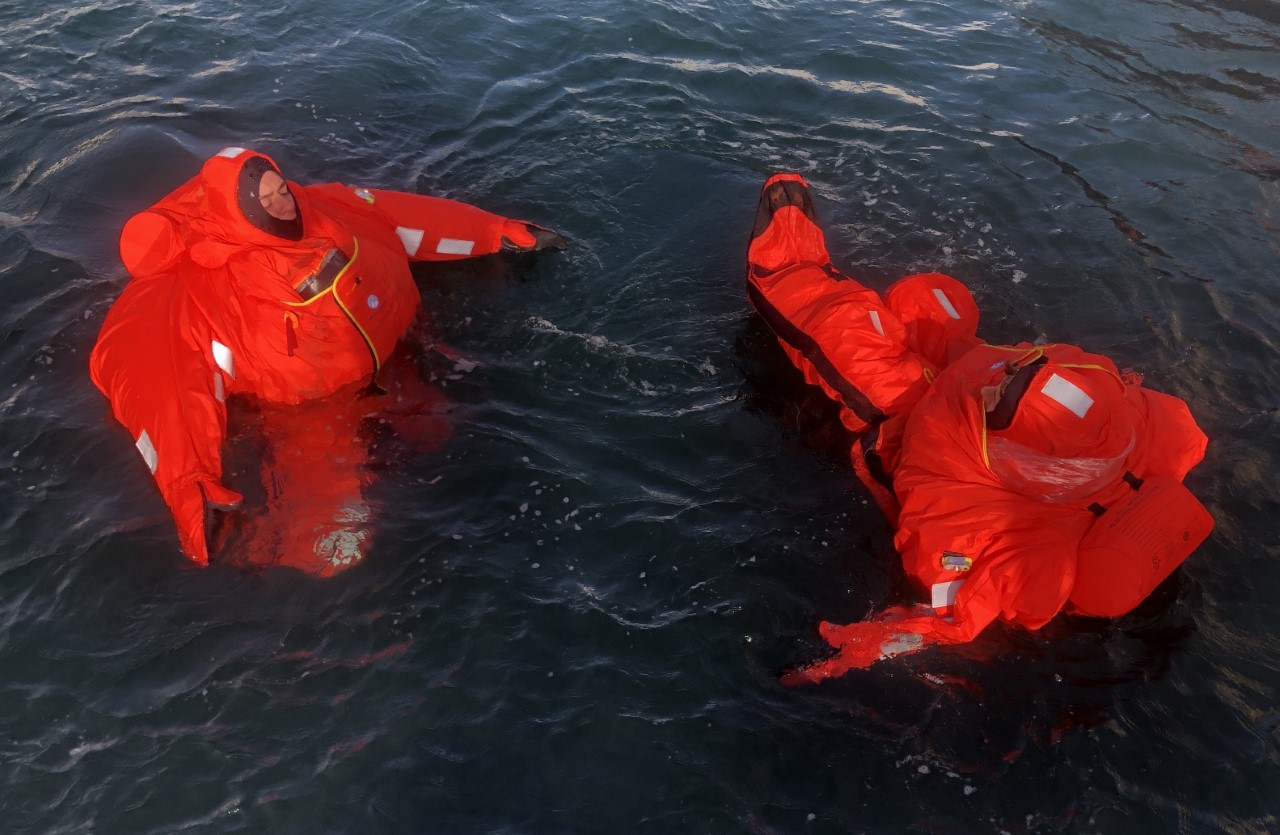 The stakes associated with safety

While White Glacier was founded in 2014, it has a history that stretches back to 1988. That was when White Glacier CEO Diego Jacobson founded a US military contractor to focus on the mass production of highly complex, labor-intensive items such as chemical protective suits and fragmentation vests. This experience with control and standardization is key when manufacturing to strict specification standards used by the government. Even one defect can lead to the loss of life, which is why the White Glacier team inspects and tests 100% of the items they produce.

That’s also why White Glacier has such a large group of trained operators and support staff, as having something certified as an Immersion Suit is no small ordeal. For an Immersion Suit to be certified, someone has to be able to put it on in less than two minutes and jump into water from a height of at least 4.5 meters. It has to be able to withstand flames for at least 2 seconds, protect from hypothermia in cold water for at least 6 hours as well as pass testing for walking, climbing, swimming, and getting onto a raft.

There are other specifications that factor into Immersion Suit certification but simply meeting the requirements wasn’t enough for the White Glacier team. Because they consider everything from the perspective of someone in an emergency situation, they knew they needed to go beyond the standards.

“What happens if you need to jump from higher than 4.5 meters, walk through flame for longer than 2 seconds, or survive for longer than 6 hours till rescue arrives?” Jacobson asked. “If there is any wind, rain, or waves, the standard neoprene suits lose protection and therefore do not make it to 6 hours before hypothermia sets in.

That’s why the Arctic 10+ was designed to exceeds all these requirements and does so while keeping the user comfortable.” 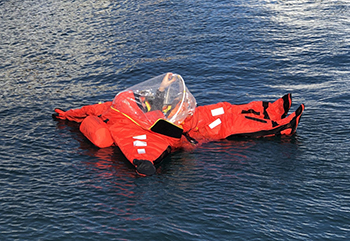 That element of comfort is critical to consider, because it isn’t just a matter of preference. If the user is uncomfortable and panic sets in, survival times will be affected. It’s the main reason the SPLASH TENT was built into the Arctic 10+, as it allows the user to eat, drink, perform first aid or bodily functions while being protected from the wind, rain, or splash from waves. They can even sleep and recover their strength, improving their survival odds.

The temperature within the SPLASH TENT can be controlled by adjusting the opening to allow more cold air as desired, but that’s just one of the features that have enabled safety on a whole new level. 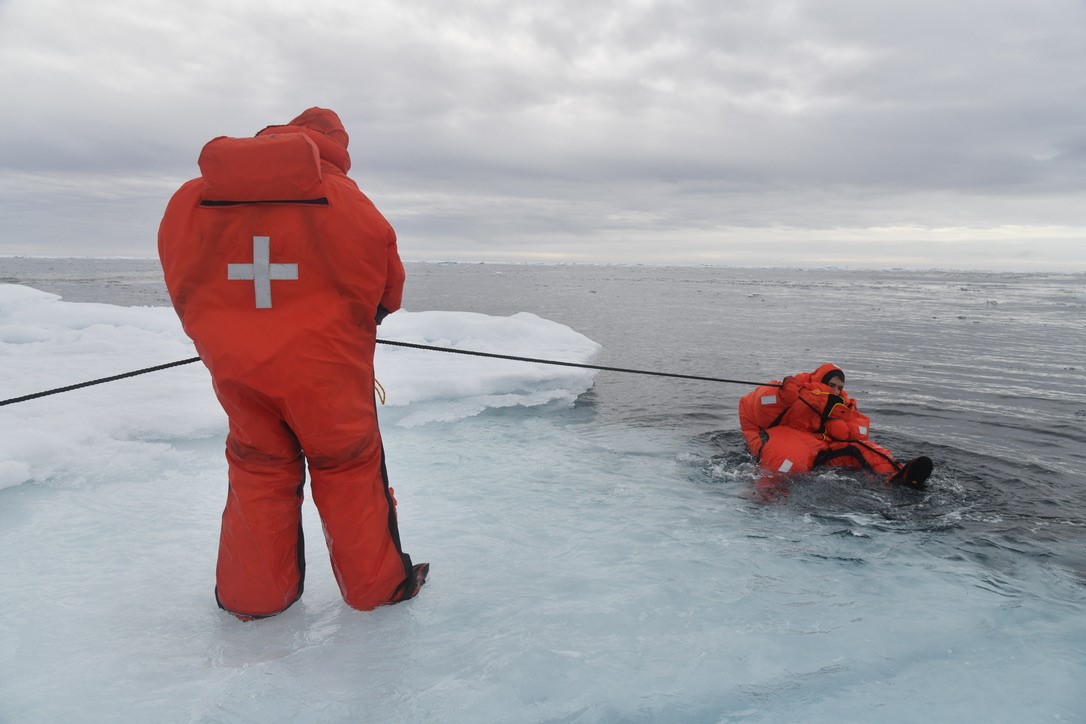 Testing that the White Glacier team has conducted has show how the Arctic 10+ holds up in survival situations much better than other survival suits. Their cold-water immersion test was performed in Trondheim, Norway. During that 6-hour test, many of the subjects slept or watched movies and reported how comfortable they felt. Some mentioned how surprised they were that they felt no cold while submerged in ice water.

This testing factored into additional improvements, as test reports from the laboratory indicated that after 10-12 hours, the feet could get cold. The Immersion Suit was subsequently modified it to allow connection between the feet and the torso cavity to circulate the warm air and extend the performance past twelve hours. Those configurations and specifics are what make the Arctic 10+ a revolution approach to hypothermia protection that White Glacier actively sought to create.

This feature allows users to be able to use their bare hands as well as access the interior of the suit. If necessary, the SPLASH TENT can be deployed to protect from wind, rain, waves and even the midday sun, when it can get hot. With the Arctic 10+, a user in temperate waters can open the suit from within to remove his arms from the suit, splash his arms with water in a controlled fashion, and then when it gets cold again, close the suit and be fully protected from hypothermia.

Those options are distinct from how other Immersion Suits are used in the water. It can be fully donned and used as a thermally protected, personal life raft, with or without the SPLASH TENT deployed. That allows it to function as a Polar Survival Suit, which is critical in the Poles where rescue times are between 8 hours and 5 days. Most other suits are designed to be used in more accessible waters, where rescue times are in hours rather than days. Hence, they do not comply with the Polar code.

Should it become necessary, the Arctic 10+ can provide the level of protection required in minutes notice, which has surprised many users, along with the price of the suit. Many had the impression that it would be much more expensive.

That feedback is something Jacobson was proud to hear, as his goal was to make a product that would be a fit for any vessel, from cruise ships to fishing boats to mega yachts operating in cold water. In any and all of these cases, the comfort and survival of passengers and crew are of primary importance, underscoring what type of crew and boat is going to benefit from having the Arctic 10+ as their Immersion Suit.

“The Arctic 10+ is for anyone who cares about making safety more than just compliance,” Jacobson mentioned. “It’s for anyone and everyone genuinely concerned with survival on the open water.”

Jeremiah Karpowicz is the Editorial Director for National Fisherman. He has created articles, videos, newsletters, ebooks and plenty more for various communities as a contributor and editor. You can get in touch with him on Twitter or Linkedin