A rare Hawaiian delicacy and tightly regulated, Kona crab is a small artisanal fishery that lands but a few thousand pounds every year.

Also called spanner crab, all females must be released by fishermen, along with males of less than 4 inches carapace length. But freeing crabs from the traditional baited hoop nets can come at the cost of some crabs’ limbs.

A team of Honolulu-based researchers, funded with a Saltonsall-Kennedy grant from the NOAA Fisheries Pacific Islands regional office, is conducting a study to see how those liberated crabs fare in the wild.

Previous research suggests up to 80 percent of the crabs caught are released, according to NOAA. The consultants of Poseidon Fisheries Research are conducting the new study to follow up on 2017-2018 aquarium experiments to determine how often crabs are injured – typically losing one of more dactyls, the last segment of their limbs – and how often they survive.

That study indicated nearly 90 percent of the injured crabs survive. The new phase is a catch-and-release study that will use tags, and the help of Hawaii fishermen, to see how they really do in the ocean. 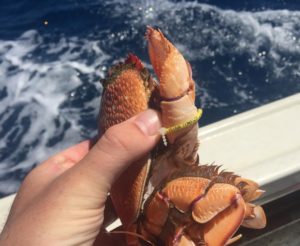 “We’re hoping to show that our lab results are representative of what’s happening in the field,” said John Wiley, a fisheries biologist and managing partner at Poseidon, in a statement released through NOAA. “And that the crabs are able to survive the minor injuries that they get during the fishing process.”

In February 2019, NOAA Fisheries released its stock assessment of the Kona crab. That paper concluded the fishery is sustainable as conducted now partly based on Poseidon's lab study.

"The regional management council here had the stock assessment coming up, and they had some data gaps, particularly post-release mortality," Wiley said in an interview with National Fisherman. After state authorities imposed the no-females rule in 2006, the fishery became less commercially viable "and there's only a handful of guys left," but there is also a culturally important recreational fishery, he said.

“If the new research corroborates those findings, it would further suggest the Kona crab fishery could handle increased fishing activity due to less restrictive regulations,” according to the NOAA statement. “Such a change could make the crabs more widely available to consumers.”

The fishery is closed during the crabs’ May-to-August breeding season. Besides net injuries, crabs can be at the mercy of other predators while trapped; a video study by Poseidon documented how spotted burrfish, a species of puffer, bite off a crab's claws. Spotted eagle rays can crunch a crab's carapace or eat them whole, leaving limbs for fishermen to find attached to the nets.

The latest work on the water started with the onset of the fishing season in September, working crabbing areas off Kona and Niihau, said Wiley.

Another lab study of spanner crabs in Australia found that mortality was high as 80 percent for crabs within 50 days of being injured, when the animals could not regenerate lost limbs. The crabs in Poseidon’s lab study had a much higher survival rate.

"If they're only missing dactyl from their limbs, they do a good job of surviving," Wiley said. "They’re able to regrow legs like other crabs do, and we’ve seen a lot of this regrowth." Mortality is higher for crabs that lose a whole limb, especially if any inner tissue is also lost.

The discrepancy between the studies’ results could be the result of differences in the lab settings, according to Wiley. The Australian scientists used smaller tanks which could have crowded the crabs and increased their stress.

"As long as you give them enough space to bury themselves (in sandy bottom) and stay away from each other" survival chances are likely much better, said Wiley. In Poseidon's study the crabs molted about 60 to 70 days after their injuries and were able to regenerate limbs.

Wiley and his colleagues are attaching thin, yellow tags around crabs' pincers. Each tag has a number associated with the crab, allowing the researchers to identify the crab and know where they caught it.

"If fishermen catch one of these tagged crabs, they can call us," Wiley says. "And hopefully they can provide a location and let us know if it has any injuries. And they can tell us how many crabs in total they caught and released."