A three-year study of cod and other commercial fish species is underway around New England offshore wind energy sites, part of a NMFS effort to better understand how proposed turbine arrays will affect the environment and fisheries.

With universities and other partners, the agency in December deployed a Slocum electric glider, a type of autonomous underwater vehicle that has proven highly successful in long-term oceanographic studies.

The glider’s instrument payload includes a hydrophone to detect the sounds of whales and of fish spawning, and an acoustic telemetry receiver to pick up signals from fish that have been captured and released with acoustic tags to track their movements. 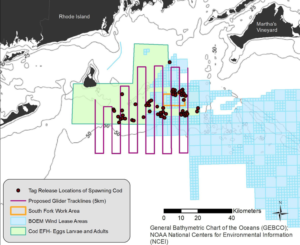 The survey is covering an area that includes the proposed South Fork Wind Farm south of Rhode Island. BOEM image.

Running on battery power, undersea gliders use a system of water ballast and pumps to slowly climb and dive in the water column, their wings generating lift and forward motion. With their long range and endurance, gliders can survey large areas for weeks at a time, occasionally surfacing to send collected data to vessels or shore by satellite uplink.

For this phase of the study, the acoustic data “will identify location and seasonal occurrence of hotspots for key commercial and federally listed fish species,” according to NOAA.

Elsewhere, cod have been are known to form large, dense spawning aggregations in predictable locations relatively close to shore. That can make them vulnerable to disturbances that might affect spawning success, according to NMFS.

“Biological sampling will determine the population’s onset of spawning and track growth, maturity, age structure, and other life history parameters,” Van Parijs said. “This information will help inform the starting date for our glider surveys each year. We will tentatively conduct these surveys from December through March this year and for longer periods in the subsequent two years.”

The study is underway at a critical time for the future of the fledging U.S. offshore wind energy. In August 2019 the federal Bureau of Ocean Energy Management was compelled to hold up its environmental impact statement for the Vineyard Wind project off Massachusetts, after NMFS insisted more information was needed about potential effects on the marine environment and fisheries.

Even before the agencies came to an impasse over the environmental assessment, fisheries scientists had been warning there needs to be more baseline information about fish populations around proposed wind power sites before construction.

Now BOEM is funding the acoustic surveys. Data for a larger study by the offshore energy planners, including potential cumulative impacts of Vineyard Wind and other projects, is scheduled to start being assembled by mid-June, with a final report scheduled for December 2020. 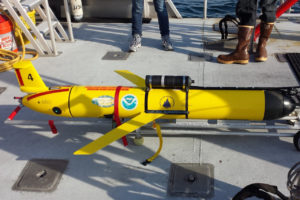 Ørsted is using the glider detection of endangered whales to guide plans for monitoring and mitigation requirements in the South Fork project, where the company hopes begin construction as early as 2021. Similar mapping will be used for planning the company’s other projects off the East Coast, including Ocean Wind array off southern New Jersey.

For the fisheries aspect of the study, researchers will tag up to 100 spawning cod with acoustic transmitters so the glider can identify spawning area. Other sensors carried on the glider collect detailed environmental data, to help scientists better understand the temperature preferences and habitat use of spawning cod in the region.

A new near real-time telemetry system is operating detect whales and fish, and the public can see data and photos as they come in from the project on a new public web page.