Maine Gov. Janet Mills announced Monday, Sept. 27, that a federal judge has granted her administration’s motion to intervene in pending litigation that threatens to shut down Maine’s lobster fishery.

The lawsuit, Center for Biological Diversity et al v. Wilbur Ross, has been ongoing since 2018, and is the result of a high rate of right whale deaths tied to migration pattern changes that likely increased interactions with shipping vessels and Canadian trap fisheries in the Gulf of Saint Lawrence.

The target of this lawsuit, however, has been Northeast U.S. lobster and crab fisheries, which have made numerous gear, area and time adjustments to avoid endangered whales for more than a decade. 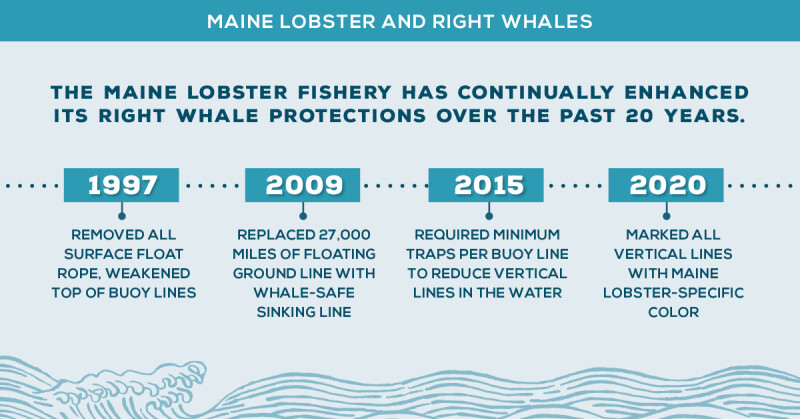 “A court decision in the plaintiff’s favor could close Maine’s lobster fishery altogether — a completely unacceptable outcome that would be devastating to our lobstermen and their families and devastating to our coastal communities and our economy. We will fight tooth and nail to prevent that from happening,” said Mills. “Intervening in this case is a critically important step in the state’s efforts to support Maine’s vital lobster industry.”

The Maine Lobstermen’s Association filed its own suit on Monday to challenge NMFS’ new rules for Maine’s lobster and Jonah crab fisheries that have resulted from the CBD v. Ross lawsuit.

The Mills Administration has contracted with the law firm Nossaman LLP to represent the state of Maine as an intervenor in this lawsuit. Nossaman attorneys have experience litigating Endangered Species Act issues related to commercial fishing. The governor is also funding the use of specialized outside counsel through the Governor’s Contingent Account.

“We are committed to making sure we have the legal expertise and resources necessary to capably represent the interests of Maine’s lobster industry in this pivotal court fight,” said Patrick Keliher, commissioner of Maine’s Department of Marine Resources. “We worked closely with industry to develop approaches that would minimize the hardship to fishermen, and through that effort, informed the rulemaking process. But the battle for this industry is also being waged on multiple fronts.”