Ocean climate bill is a grab bag for marine stakeholders

We could start with the irony of a representative from Arizona introducing an oceans climate bill, hailing not only from a landlocked state, but one most known for its lack of water.

But let's instead lead with the fact that the blueprint for this bill was introduced and failed to make it out of committee in California — one of the nation's most progressive states. Now Gov. Gavin Newsom has made an end run around the legislative process by creating an executive order to effect the changes in the bill that could not pass with votes.

The federal bill is more than a mixed bag. Reading its 324 pages felt like swinging at a piñata packed with a mix of treats and lit fireworks.

"I am still trying to come to terms with what I am reading," said Mike Conroy, executive director of the Pacific Coast Federation of Fishermen's Associations. "It is clearly major legislation with lofty goals. There are some provisions we can support (the provisions surrounding Buying American Seafood under Title IV); but there are many which would benefit from additional scrutiny. We remain committed to working with Congress to share our concerns and perspectives."

In California it was called 30x30, based on the overarching goal to designate 30 percent of the state's waters and lands as protected areas by 2030.

Remember that at most 10 percent of the ocean is fishable ground. But there's something for every marine user group in the federal bill, including the military under the underwater sound restrictions that could reasonably include seismic testing and sonar restrictions.

"The Ocean-Based Climate Solutions Act of 2020 is a very comprehensive bill with a long list of proposals to address climate change," said Ben Martens, executive director of the Maine Coast Fishermen's Association. "Maine fishermen have seen firsthand the effects climate change is having on our fisheries, and we fully support a robust and immediate response to these challenges. That being said, we do have concerns that this bill may fundamentally undermine the Magnuson-Stevens Act and particularly the regional council system, which uses the best available science and a collaborative approach to fisheries management. We also have concerns regarding the impacts of the bill on our ability to access traditional fishing grounds due to increased wind power and the creation of additional no fishing areas."

The second section of the federal bill starts with the Protection of Habitat, directing a new federal policy "to prohibit any commercial extractive or destructive human activity in at least 30 percent of the ocean under United States jurisdiction by 2030. The 30 percent shall include existing areas in which commercial extractive and destructive human activities are and continue to be prohibited; and (2) to support the adoption and implementation of a global goal to protect at least 30 percent of land and 30 percent of ocean areas by 2030."

"We're a nation that has long been sustained and protected by our oceans," said Rep. Jared Huffman (D-Calif.) in the press conference to introduce the bill. "This legislation takes a very important step forward." 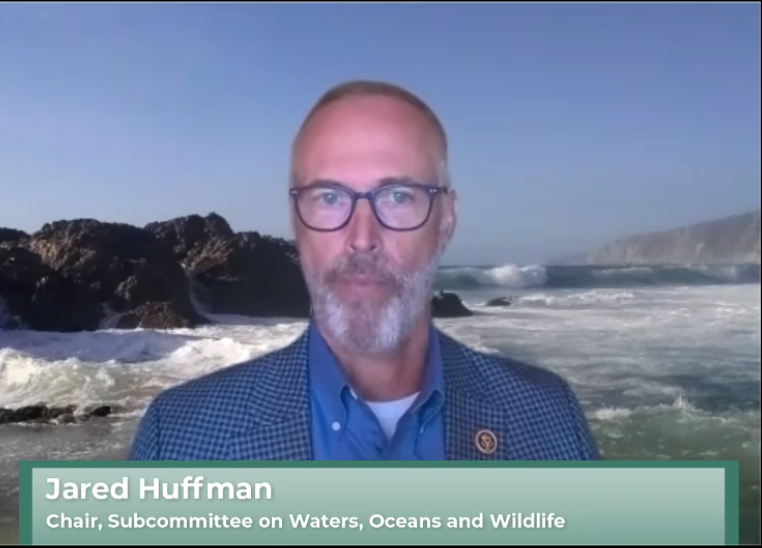 "As we consider the impacts and the solutions to the climate crisis, we really have to be just as concerned about our oceans, where we are seeing major declines in biodiversity, rapidly shifting fish stocks, sea level rise, and widespread losses of our world's most important coastal habitats," added Huffman, who has been holding a fisheries listening tour in coastal communities around the country for the last year.

Somewhere between the bill's introduction in California, its failure to pass there, and its reintroduction on the national stage, recreational fishing interests managed to leave a window for sport fishing in these proposed closed areas. I hope Huffman, who has been an advocate for commercial fishermen, is still listening as we begin the journey down this new road.

The third section of the bill mandates the implementation of offshore wind. As we've seen so far, this administration has generally been supportive of offshore wind energy development, including speeding up the time lines for lease approvals. However, the process has been slowed by input from other marine resource industries whose work conflicts with some of the proposals for wind array siting plans and proposals.

The approval and permitting process for offshore wind arrays so far seems to be working, as no leases have been denied, but rather more information is being gathered before granting foreign interests access to our exclusive economic zone. A mandate for a system that has yet to prove its reliability and sustainability in U.S. waters seems short-sighted. Let's not short-circuit the systems we have in place to protect citizens and ensure the safe implementation of new infrastructure and industry.

"While recognizing the importance of addressing climate change, I urge Congress to consider fishermen not as obstacles, but as partners in developing policies based on sound science, thriving coastal communities, and food security,"said Annie Hawkins, executive director of the Responsible Offshore Development Alliance. "During today’s press conference, Rep. Alan Lowenthal (D-Calif.) stated that this administration has 'thrown obstacles in the way' of the nation’s first proposed commercial-scale offshore wind energy facility. Indeed, the administration undertook a supplemental review to evaluate the environmental impacts of a new era of ocean industrialization, before granting carte blanche to an activity that will fundamentally alter fishing, benthic habitat, biodiversity, and protected species. That review correctly found that such activities will have major impacts to these resources and we hope these impacts will be effectively mitigated."

There's a lot more to this legislation, which we are sure to see the effects of for many years to come.