The recreational fishing community has its share of skeptics too, worried about the effects of construction and new seafloor cables carrying megawatts of energy to shore.

One group, Anglers for Offshore Wind Power, is working on the premise that offshore wind development could be good for their fisheries and the environment — if they, like organized commercial fishermen, can get a seat at the table with federal energy planners and wind companies. 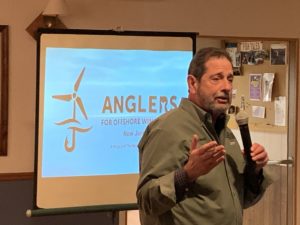 Monti and Eidman hosted a Feb. 6 public meeting at the Forked River Tuna Club, an institution for more than 60 years on the Jersey Shore port fishing scene. Monti, who fishes out of Warwick, R.I., described what’s happened at the Block Island Wind Farm, the pilot project of five turbines and 30-megawatt peak capacity built there in 2016.

“It’s had a positive impact in my business,” said Monti, who described how the turbine jacket foundations with their steel frames provide 80 to 90 feet of fishing structure below the surface that was rapidly colonized by hydroids, mussels and the fish that followed.

Monti is vice president of the Rhode Island Saltwater Anglers, a fishing writer, and a believer that offshore wind power can be a positive good for fishing and the environment if done right. His recreational industry is benefiting from productive fishing around the turbine structures, and there is an eco-tourism element, too, along with the region’s whale-watching audience.

“Anyone I take out there is just in awe to these things,” Monti said of fishing under the turbines.

The coming generation of bigger turbines — like the GE 12-megawatt Halide machines that stand 853 feet tall — will likely stand on monopole towers, tubular structures straight down to the seabed. Their foundations would be ringed with rock anti-scour materials that will function like an artificial reef, “so that’s where I’d be dropping my lines,” Eidman said. Having guarantees of that access from turbine operators and the Coast Guard is “one of our foundational principles” if the industry is to get fishermen’s support, he said.

Coast Guard officials have said they have no intention of restricting navigation within future turbine arrays, although Eidman noted there is discussion of security zones around substation structures where the power generated would be transmitted to shore. 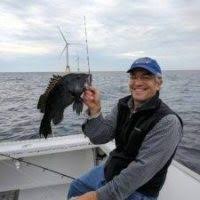 An angler with a black sea bass caught near the Block Island Wind Farm. Anglers for Offshore Wind Power photo.

The audience of about 60 had a lot of questions. With wind developer Ørsted planning a turbine array off Atlantic City that could be operating by 2024, offshore game fishermen are starting to think about issues like radar interference that New England fishermen have raised.

“I’ve been using a 25-mile radar for 40 years. When you get between a couple of ships at night, before AIS, it was terrifying,” said Kevin Wark, a Barnegat Light, N.J., gillnet captain who has been advising New Jersey energy regulators about fishermen’s issues with offshore wind development.

Radar interference and the scattering of return signals by rotating turbine blades “is real,” said Wark, an NF Highliner. “For me, the answer is AIS. AIS on every tower.”

Requiring automatic identification system transponders on individual turbines will help mariners safely navigate around turbine fields, Wark noted. He serves on a technical committee with the Responsible Offshore Development Alliance, a coalition of fishing industry groups that represents the industry to government agencies and developers.

The alliance has agreements with the federal Bureau of Ocean Energy Management and wind developers to foster research into the environmental and other effects of offshore turbine construction and operation. Eidman, who’s petitioning New Jersey regulators to add recreational fishermen to their own advisory panel, said the recreational community needs to get organized along the lines of RODA to keep their interests represented at the regional and national levels.

BOEM is delaying further approvals for the Vineyard Wind project off southern New England, pending a cumulative impact study of how as many as 15 East Coast projects could affect the environment and other maritime uses. BOEM officials have pushed back the expected delivery date of those findings, with preliminary documents now to be released June 12 and a final decision Dec. 18.

“Right now, we’re at a critical place, and we need to get answers to these questions,” he said.