Northeast lobster and Jonah crab fishermen have until May 1, 2022, to make the necessary gear modifications to help protect North Atlantic right whales. Are you ready?

In a "leadership message" April 20, Michael Pentony said “most participants in the Northeast lobster and Jonah crab fishery are nearly finished with the needed gear modifications and ready for the deadline. However, unanticipated supply chain delays are preventing some of the fleet from fully coming into compliance."

“I want to assure fishermen who are making good faith efforts to comply with these new measures but are not able to procure compliant gear that we understand the difficulty of their situation," Petony added. "We are working closely with our state and federal enforcement partners to implement a graduated enforcement effort that will focus on compliance assistance rather than civil penalties until we have determined that localized supply chain issues have been sufficiently resolved.”

“I would like to acknowledge the tremendous efforts of fishermen, gear experts, and manufacturers who have developed and tested numerous weak links, sleeves, and ropes that comply with the 2021 modifications to the Atlantic Large Whale Take Reduction Plan. We would also like to express our great appreciation to the many fishermen who have already or are now modifying their gear to reduce the risk of entanglements.” 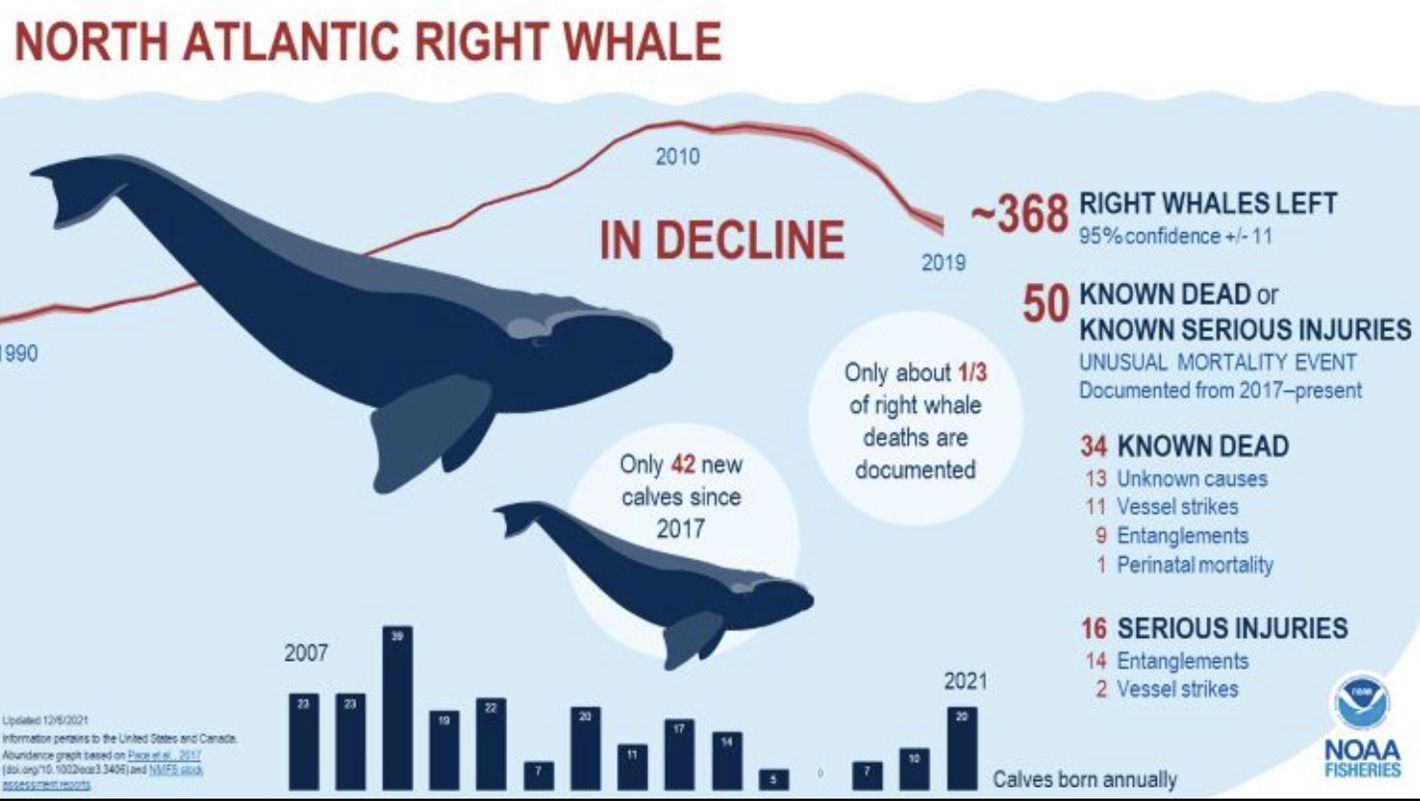 The Atlantic Large Whale Take Reduction Plan began development in 1997, with help of the Atlantic Large Whale Take Reduction Team, to reduce the level of serious injury and mortality of three strategic stocks of large whales (North Atlantic right, humpback, and fin) in commercial gillnet and trap/pot fisheries. The measures identified in the plan were also intended to benefit minke whales, which are not designated as a strategic stock, but are known to be incidentally injured or killed in gillnet and trap/pot fisheries.

The North Atlantic right whale is one of the world’s most endangered large whale species; the latest preliminary estimate suggests there are fewer than 350 remaining. Two other species of right whales exist: the North Pacific right whale, which is found in the North Pacific Ocean, and the Southern right whale, which is found in the southern hemisphere. Right whales are baleen whales, feeding on copepods (tiny crustaceans) by straining huge volumes of ocean water through their baleen plates, which act like a sieve.

The plan to protect the North Atlantic right whale has been modified on several occasions, most recently in 2021. Development of and modifications to the Plan requires a review of the final stock assessment report for each marine mammal addressed by the Plan and any substantial new information.

In his message to fishermen, Michael Pentony noted that despite all efforts, “the availability of compliant gear is not yet universal. NOAA Fisheries is closely monitoring the challenges that some Northeast lobster and Jonah crab trap/pot fishermen are facing in their effort to comply with weak rope measures.”

They have fished with weak inserts in state waters since state regulations were implemented in the spring of 2021. Offshore fishermen, led by the Atlantic Offshore Lobstermen’s Association, have sourced larger diameter weak ropes and are now conducting field testing to ensure they retain dimensions that can be used in offshore haulers without jamming. Availability continues to be a challenge despite these persistent and collaborative efforts, many initiated in early 2019.

“At the Greater Atlantic Regional Fisheries Office, we are committed to continuing to message urgency to rope and weak link producers and to monitor the supply challenges closely," said Pentony. "We will also remain in close communication with fishermen as well as with New England state managers, the Northeast Office of Law Enforcement, and our state and federal enforcement partners. I will continue to work with state fishery managers to ensure that both North Atlantic right whales and the valuable lobster fishery have a long and healthy future."