Brecka’s crew was busily cutting black sea bass Wednesday afternoon, preparing for another open-air seafood sale near the dock, which was hit hard by the late March collapse of New York market prices. The first event April 4 attracted enough of a crowd – maintaining the required 6-foot social distancing among customers – to sell out 300 pounds of scallops in an hour. 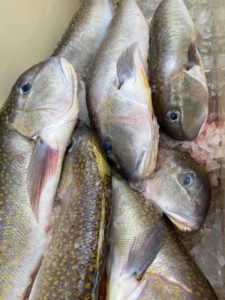 “It’s coming back up” as retail customers seek out sources for local seafood, said Brecka. But the retail shop can handle only a portion of what the Point Pleasant fishermen can land during good weather, he added.

“You’ve got sea bass, fluke, porgies, scallops, weakfish, monkfish, mackerel,” Brecka said, in a week when good weather allowed fishermen to do their traditional push for Easter week buyers. “The fish are there, but with all the restaurants closed up north the demand is way down.”

Lavallette fisherman Brick Wenzel estimated usual supply channels are bringing no more than 20 percent of normal volume to markets. At the Viking Village dock in Barnegat Light, N.J., manager Ernie Panacek  looked at the still-fragile markets last week and recommended that some captains could plan trips.

“The weather finally quieted down. The wind just wouldn’t quit,” said Panacek. “This is a good week for us.”

Retail outlets were reporting more sales and some could even use more fish, he said: “New York is getting some, Philadelphia.” 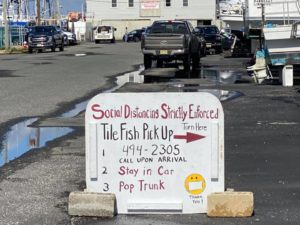 Prices were down substantially for scallops but some demand was returning, along with fluke coming into the small port at the north tip of Long Beach Island. Out of Lighthouse Marina, the Frances Anne embarked on a three-day trip for golden tilefish, and the dock accepted advance orders for whole fish when the boat returned Wednesday.

Customers lined up in their cars at the marina parking lot, instructed to pop their trunks open for no-contact curbside pickup.

Despite that kind of creativity, there are immense challenges to building new sales. With draggers catching fluke and a 2,000-pound trip limit, the return of a few boats at once can crash prices when demand is so low.

“We’re using our quota up at $1.75 (per pound) when it should be $5," said David Gauro, manager of the Belford Seafood Cooperative in New Jersey, where fluke is a primary product to the New York City market.

But with restaurant closings, “they took 8 million customers away from us,” said Gauro. “Last night the fluke price was $5.25, which is where it should be.” He says fishermen should be planning and coordinating more to help sustain pricing, so simultaneous landings as less likely to flood the modest market.

“I’ve been talking to the buyers,” said Gauro. “These boats are out now. When they all come back at once, the price will drop right down.

“I have boats asking for a $2 guarantee. I asked New York and they couldn’t guarantee.”

“My retail store has been phenomenal. But I can’t sustain that though the shop with the volumes these guys can land,” said Gauro. The co-op was keeping its shoreside crew employed and paid, but the industry needs help from the government and NMFS to make it through this crisis, he said: “We’re not looking for a handout but a hand up.”

The Belford market could offer curbside pickup next, and Shore Fresh customers are asking for that too. Brecka said he may be exploring the possibility of making some local deliveries next.

But with New Jersey Gov. Phil Murphy still announcing new measures to tighten requirements on local businesses – at the moment, including a prohibition on short-term rentals that are the lifeblood of Jersey Shore beach resort towns – the seafood industry is worried about the coming weeks.

“We can put money away in the summer to make it through the winter,” said Brecka. “If we don’t have normalcy by June, people are really going to suffer. By Memorial Day, I’d say.”