In partnership with NOAA, Saildrone is again launching a fleet of ocean drones to collect critical hurricane data to make coastal communities safer, and that includes fishermen.

One of the biggest challenges to hurricane forecasting is predicting rapid intensification, when hurricane wind speeds increase at least 35 mph over a 24 hour period. To fully understand how storms intensify, scientists collect data on the exchange of energy between the ocean and atmosphere in the forms of heat and momentum. However, gathering data in this dangerous environment is best accomplished by uncrewed systems like the Saildrone.

Saildrones are equipped with a special “hurricane wing,” which looks like a hard sail, to withstand the extreme wind conditions encountered in storms as they gather data from the near-surface ocean and atmosphere in real-time. The data are used to improve understanding and prediction of tropical cyclone intensity changes and advance our knowledge of the ocean-atmosphere interactions that fuel them.

One of them, the Saildrone Explorer SD 1045, sailed through the eye of category 4 Hurricane Sam. Battling massive waves and winds over 100 mph, the vehicle not only survived intact but sent back the first-ever live video footage from inside the eye of the storm, marking a new era of hurricane observation. 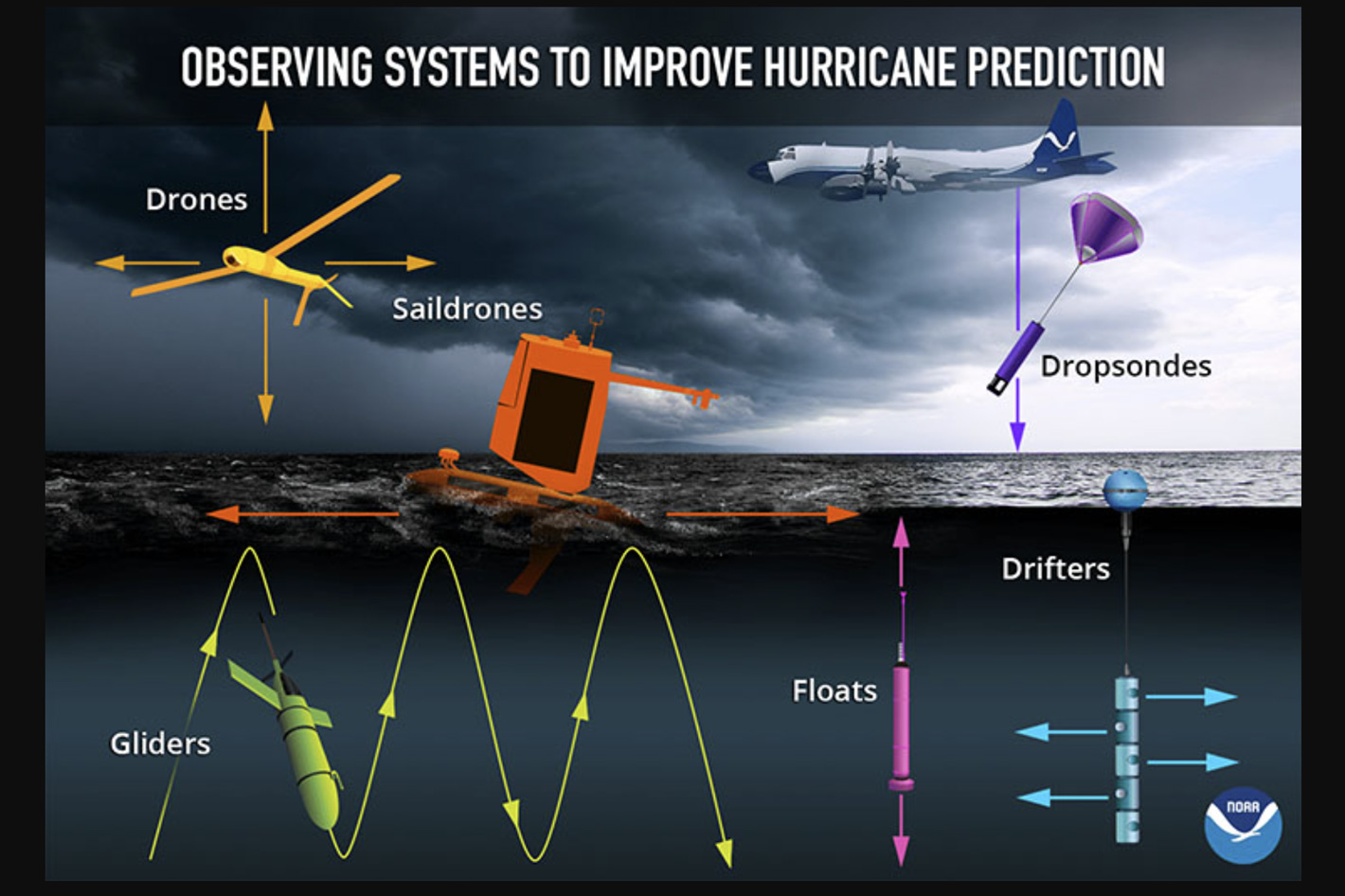 An array of marine and air uncrewed tools

Now Saildrone has launched its second annual Hurricane mission, partnering with NOAA’s Office of Oceanic and Atmospheric Research to send seven uncrewed surface vehicles (USVs) to brave the treacherous hurricane season, collecting more insights into how large and destructive hurricanes grow and intensify in the Atlantic Ocean and the Gulf of Mexico. For the first year, two saildrones will track hurricanes in the Gulf of Mexico.

“This season, NOAA will work with numerous partners to gather oceanic and atmospheric observations using a suite of platforms to monitor the conditions that play a role in hurricane intensity changes,” said John Cortinas, director of NOAA’s Atlantic Oceanographic and Meteorological Laboratory (AOML).

“Storms that intensify rapidly can cause extensive damage and loss of life and real-time observing systems are crucial to better understanding the atmospheric and oceanic processes that lead to the formation and intensification of these hurricanes.”

As NOAA predicts an above-average 2022 hurricane season, with up to 21 named storms and three to six major hurricanes, a better understanding of hurricanes is essential and that is the reason why the organization has chosen the Saildrone as part of an array of marine and air uncrewed tools used to improve forecast models.

This year, three of the saildrones will work together with underwater gliders to obtain nearly collocated measurements of the upper ocean and air-sea interface. Data from saildrones and other uncrewed systems will help forecasters better understand the forces that drive hurricanes to warn communities earlier. 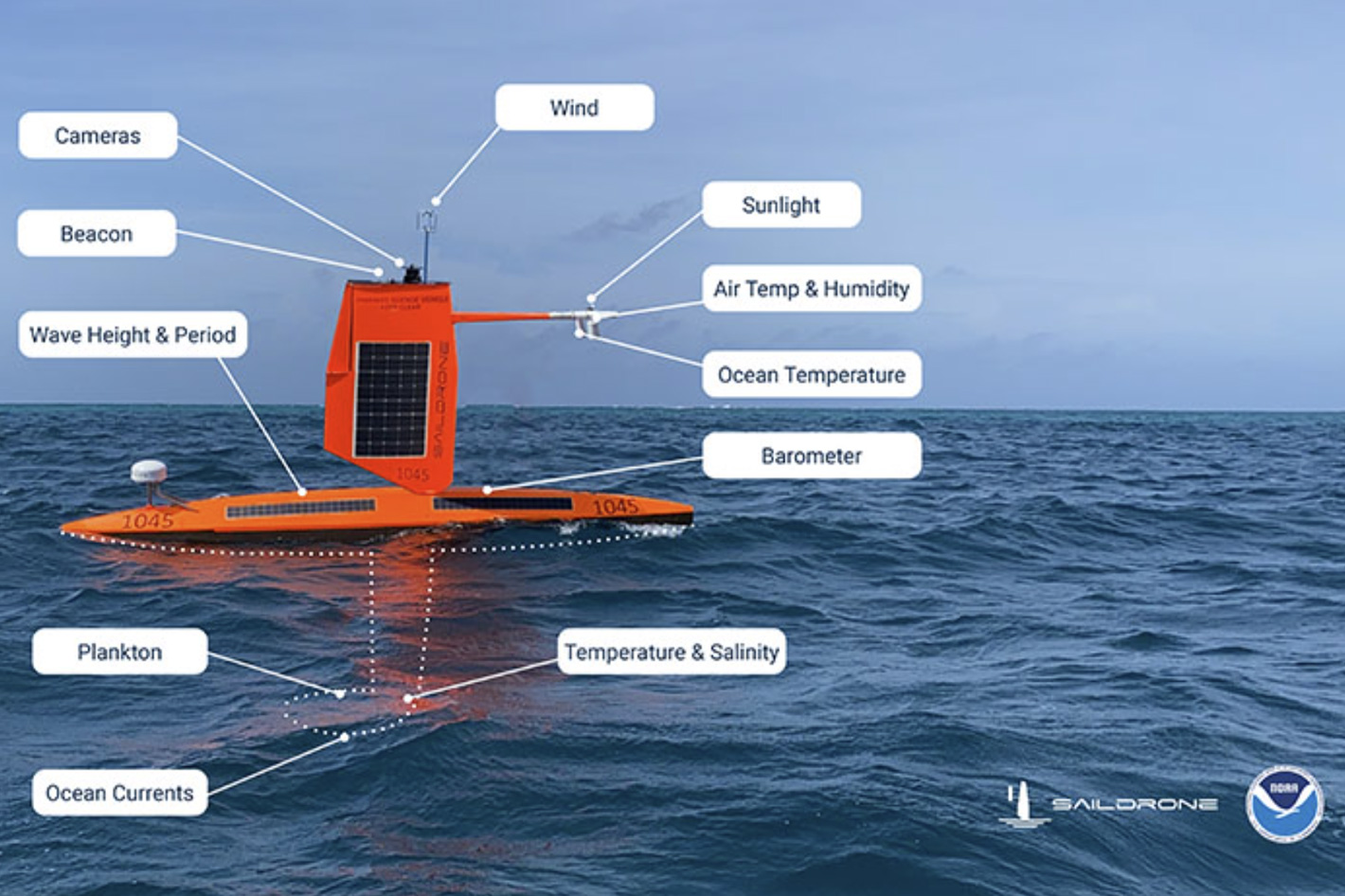 NOAA and partner scientists will deploy underwater gliders equipped with sensors that measure temperature and salinity down to a half mile below the ocean surface. These gliders provide high-volume, high-resolution data in areas where hurricanes frequently travel.

Because of the strong interaction between the ocean and atmosphere during a hurricane’s passage, better representation of the ocean in weather models has led to more accurate intensity forecasts.

NOAA says that “as opportunities arise, the Saildrones will also coordinate with the small uncrewed aircraft system (sUAS), the Altius-600. Altius-600 drones will be deployed into hurricanes for the first time from NOAA's Hurricane Hunter aircraft to sample the atmosphere several hundred feet above the ocean surface.”

The goal is to collect the first coordinated air-sea and atmospheric measurements in a hurricane from uncrewed ocean and aerial drones. The coordination of these instruments simultaneously sampling the ocean and atmosphere near each other in real-time will provide high-resolution data from all parts of the hurricane environment to improve forecaster situational awareness leading to improved forecasts.

“We are excited to expand this effort to collect vital data in both the Atlantic and the Gulf of Mexico. We opened our Florida office earlier this year to support exactly this kind of mission, as well as our goal of mapping the entire sea floor around Florida,” said Saildrone CEO Richard Jenkins. “Combining in situ ocean data with a better understanding of the ocean floor, will help us predict both storm intensity and storm surges, keeping our coastal communities safer from these destructive events.”