A longtime advocate for commercial fishermen found himself in peril when a fast-moving fire consumed his 62-foot trawler while shrimping in waters off the Louisiana coast.

George Barisich, the 63-year-old president of the United Commercial Fishermen’s Association and 2002 NF Highliner, was trawling the waters of Lake Borgne with deckhand Robert Campo Jr. at around 10 p.m. on Jan. 2, when smoke began wafting.

“There was smoke everywhere,” Barisich said. “I got the nets up and we saw the fire onboard. We subdued it a couple of times with the extinguishers we had.” 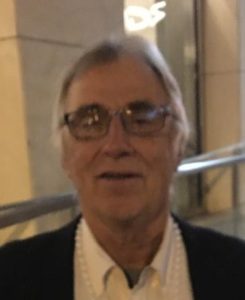 George Barisich is president of the United Commercial Fisherman's Association.

His cell phone and plotting instrumentation were beyond reach as the cabin was consumed. But Campo’s phone was in his pocket, and he used it to call the Coast Guard.

Shifting winds did the men no favors, and efforts to halt the fire were not successful.

“We stayed on the stern of the boat, and we almost had to jump one time,” said Barisich, who used a 5-gallon bucket to keep advancing flames from the area of the fuel tank.

A Coast Guard boat reached the Peruga and rescued the men. The vessel sank about a quarter-mile northwest of Half Moon Island, some hull and the rigging still visible.

The cause of the fire is not known at this point, although Barisich reckons it may have had something to do with the exhaust. Less than two weeks after the loss, Barisich was in Washington, D.C., lobbying for commercial fishermen, as he has done for decades. 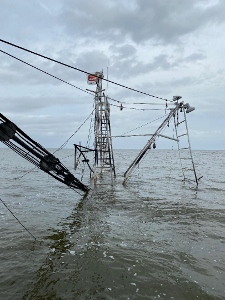 “It has been very moving to see people we have helped for so many years stepping forward to help now in my time of need,” he said.

A GoFundMe page has been established to aid Barisich in salvage and getting back on the water again. Louisiana Environmental Action Network organizer Michael Orr created the page.

John DeSantis is the senior staff writer at The Times, a newspaper in Houma, La. and regularly contributes to National Fisherman.