Around 90 percent of the world’s fishermen use small boats to land 50 percent of the global catch. For some, like the dulse harvesters of Grand Manan, Canada, the Lunenburg dories they use display the lines of an ancient design.

For others, like the setnetters of Alaska, aluminum skiffs like those designed and manufactured by Snow’s Boats are in the vanguard of design. Among oyster tongers in Mississippi Sound, south of Mobile, Ala., Bosarge skiffs have been popular for decades. Fishermen shifting to oyster farming have a new option from DLBA naval architects in Chesapeake, Va. While many small-boat fishermen build their own boats or use stock boats like Lund aluminum skiffs or fiberglass Carolina skiffs, many small boats have evolved to serve particular fisheries. 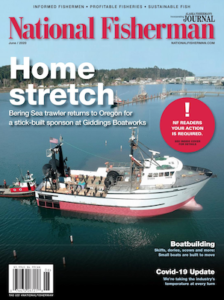 Read the full story for free online in our June issue — no paywall — just click here to download or view on screen.

The dory, for example, is a simple, easily built, flat-bottom boat with a sweeping sheer and a narrow tombstone transom. The dory is famous for its use on schooners sailing to the Grand Banks in the 19th century where fishermen in pairs would set off to handline and tub trawl for cod and halibut. It’s the boat in Winslow Homer’s famous painting “Fog Warning,” which depicts the danger the little boats faced of getting lost from the schooner hundreds of miles from land.

“They were ubiquitous,” says Daniel Moreland, owner of the Dory Shop, in Lunenburg, Nova Scotia. “There were dory shops from New York City to Newfoundland,” says Moreland, who captains the 179-foot sail training ship, Picton Castle. “Demand has shrunk, but we still get calls. The dulse pickers use them on Grand Manan.”

Read the rest for free online in our June issue — no paywall — just click here to download or view on screen.