Founded in 1983 in Fort Lauderdale, Fla., MSHS opened a 50,000-square-foot facility in Everett, Wash., in 2017 to handle sales, service, and parts in the Northwest. Since then, MSHS has been the distributor for FPT in the region, where the numbers of FPT users are growing.

“We have dealerships everywhere, but we’re the master distributor, supplying all the FPT parts and engines,” said Justin Roeser, the business development manager at the Motor Services Hugo Stamp Everett office. 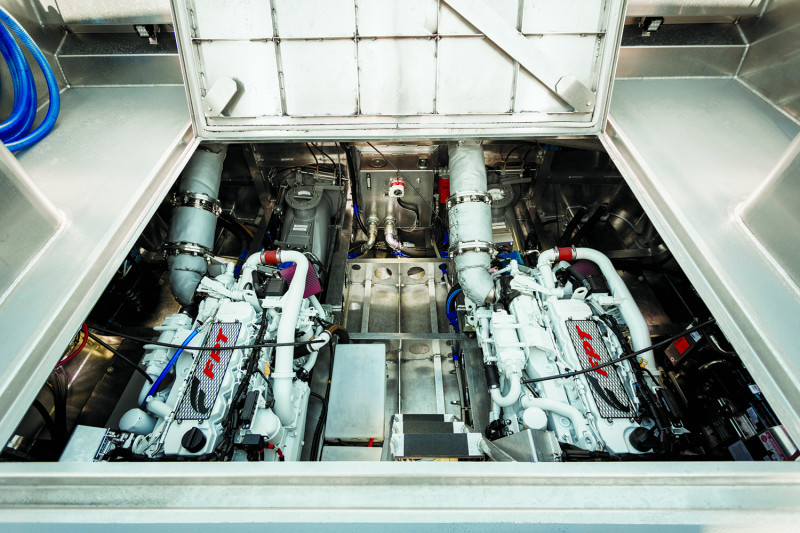 Roeser added that MSHS service technicians take care of the engines and also fan out to dealerships, where they train local employees to work on the engines.

“We show them the way around the engines and teach them how to run all the diagnostic equipment. We try to empower the dealers to locally support their customers as much as we can,” Roeser said, adding that MSHS has its own service people in some parts of Alaska, including Bristol Bay.

“Some of our techs are actually Bristol Bay fishermen,” Roeser said.

And while Roeser pointed out that FPT is not new to Alaska, he said it has gained momentum in past years. Part of that, according to MSHS sales specialist Torsten Schmitt, is not just growing service support, but also better access to FPT parts and service, especially in remote fisheries like Bristol Bay.

“Lack of spare parts has been part of the resistance to foreign brands, but that is no longer the case. For this area specifically, Alaska Air Cargo’s GoldStreak reaches a lot of the common fishing grounds within 24 hours. Plus, increased local service points, which carry spare parts and even stock engines, make FPT a solid choice now,” Schmitt said.

To hammer out a niche in a diesel engine market crowded with respected, well-known brands, FPT had to offer fishermen tangible advantages. Schmitt points to the FPT’s fuel economy, reliability, and strong size-to-power ratio, which are advantages that fishermen who use the engines echo.

Tom Aliotti is a Bristol Bay fisherman and the head of Aliotti Enterprises, one of the bay’s most innovative and respected boatbuilders. Aliotti has now built nine boats with twin FPT 6.7-liter N67-550 engines, which run 500 hp at 3,200 rpm. FPT engines are a bit cheaper than some other brands, but Aliotti said that was not why he chose them.

“I researched a lot found and that they had been around on the East Coast for a long time and were very reliable. The lobster guys use them, now the tuna guys use them. I just couldn’t find many people who had problems with them,” Aliotti said.

The small footprint and strong size-to-power ratio is also a draw for Bristol Bay fishermen, who are constantly looking to ditch weight for shallow fishing and save space on cramped vessels. Aliotti, who will put another three new boats on the water in Bristol Bay next summer, said he had just ordered a round of FPT’s new N67-570 EVO, which now feature 530-hp commercial rating at 3,000 rpm. Aliotti pointed out that the engine is 400 pounds lighter than comparable 9-liter engines.

“These engines are so light and powerful. Plus, it’s a noticeable amount of fuel you save,” Aliotti said.

Yakov Basargin of Jackson Marine in Homer, Alaska, is another FPT believer. He said he has tried many engines over the years and has settled on FPT not just because of the engine’s performance and reliability, but also because of the good service. Basargin said he ordered some of the new 15.9-liter C16-1000 engines last March and, despite complications from the covid pandemic, received them on time and did not miss a minute of fishing.

“The level of commitment sold me to continue using FPT. I also used some FPT C90s for local repowers, which perform extremely strong. My customers are super happy, love the performance, quietness and low fuel burn,” Basargin said.

And while most Bristol Bay boats are running smaller twin engines, Basargin said he has set up an improbable single-engine boat with a larger FPT engine that has defied expectations.

“A special project I did on my own is a single-engine Bristol Bay vessel. People called me crazy and said it would not work. I decided on a single FPT C16-1000 and the Alamarin-Jet Omega 42 as the power pack. We reached incredible performance exceeding 36 knots,” Basargin said.

While Basargin conceded the large jet pack contributed to the power, he said he had never seen a single-engine vessel perform that well.

“For cost, reliability, and performance, I would pick these engines every day,” Aliotti concluded.

‘We are the pioneers’: Building a hydrogen-powered fishing vessel

‘We are the pioneers’: Building a hydrogen-powered fishing vessel