In Europe, Siemens, Volvo-Penta and others in the marine industry are investing millions in developing hybrid diesel-electric systems for fishing vessels. These big players believe hybrid power has a lot to offer.

So does Sitka, Alaska, fisherman Fabian Grutter. He has spent five years and about $40,000, building his own diesel-electric boat. Grutter has no engineering training.

“This is Alaska,” he says. “A mechanic can cost you $100 an hour — if there’s one around. You have to do things yourself.” Grutter has turned his 34-foot gillnetter-longliner, the Sunbeam, into what may be the first hybrid electric fishing vessel in the United States.

“Gillnetting, you’re not even using the engine most of time,” says Grutter. “You spend 18 hours a day idling, you just slip it into gear to stretch your net out once in a while.”

Three years ago, Grutter repowered with a 6-cylinder, 330-hp John Deere 6068AFM85, and installed it with intentions of adding a battery bank and electric motor.

“When we put in the new engine, I took out the forward fuel tanks to make room for the batteries, and made the deck over the engine so I could take most of it up to access everything.” Grutter also shrunk his fish hold from 10,000-pound capacity to 8,000. “These blackcod aren’t coming like they used to anyway,” says Grutter. “I used to fill the boat in one trip. Now I have to make a few trips.” 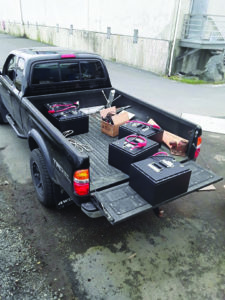 Working through the Electric Car Company in New York, Grutter had his 1200-pound battery bank—10, 144-volt batteries—custom made in China for around $22,000. Fabian Grutter photo.

Grutter had already converted a truck to electric power and learned some valuable lessons in the process.

“It’s all about battery management,” he says, and dives into a topic he has steeped himself in for years. “If you haven’t got a good BMS [battery management system], you’ll ruin your batteries,” he says, putting it simply. “With lithium-ion batteries, each cell has to stay between 2.5 and 3.6 volts. If you go over or under, you can start a fire or an explosion.”

Fires and explosions are undesirable under the best of circumstances. But on a 34-foot boat miles offshore, they are often deadly.

“The battery management system keeps all the batteries balanced,” says Grutter. “It’s got a wire going to every cell, and feeds electricity to any cell that’s getting low. It shuts the system down if the voltage gets too high or too low.”

After some expensive lessons with his truck, and years of research, Grutter had a battery bank custom made in China.

But the Sunbeam is a small boat.

“We still had to cut a 5-inch inset into the fish hold to fit the motor,” says Grutter. He bought the motor through Green Shed Conversions for $4,150.

“It delivers 200-foot pounds of torque in one second.” Grutter has the motor connected to the shaft with Brecoflex online pulleys and belts.

“The pulleys clamp onto the shaft,” he says. Grutter has the motor set up at 3:1 reduction, and the gear on his diesel freewheels when the electric motor is driving the boat.

“I’m using a $15 shifter throttle, and the power is too much,” says Grutter. “Yesterday it slipped a cog. The belts are slipping. I’m trying to get Livorsi DTS shifters, so I can throttle up gently.”

By early February, Grutter had taken the Sunbeam on four sea trials. Based on what he’s seen, he is expecting 60 percent fuel savings when he’s gillnetting close to home.

“I have to run further out for blackcod. I think we’ll get about a 30 to 35 percent fuel savings. But I won’t have to rebuild the diesel for years.” 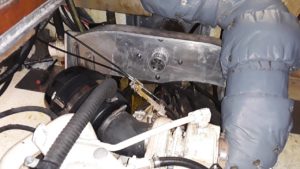 During sea trials, Grutter is learning what his batteries and electric motor can do. “I’ve got an amp meter and you can do the math. Cruising at 6 knots, I can run for two and a half hours. Trolling or gillnetting, twelve hours. And it’s quiet. I called my sister while we doing sea trials. I had the engine room half uncovered and she couldn’t even hear it. Try that with a diesel running.”

Grutter has some troubleshooting to do while testing the boat, and it sounds like a rat’s nest of issues and work-arounds.

“I turned on the batteries before I hooked them all up, and it’s created problems with the flat screen. It was all preprogrammed for me in China. I have to get the codes, so I can reset it.”

While he’s done most of his engineering himself, Grutter gets information from his suppliers. “I did my truck with Green Shed Conversions in Florida. I talk to them a lot. The guy’s name is Steve Clunn.”

The HyPer 9 hv is an AC engine, so Grutter has to convert the DC from the batteries to AC. “One of the biggest challenges is programming the motor,” he says. “You set the rpms and acceleration and about 15 other things with a computer. I had Eric Holmgren from [Current Navigation] come down and do it. It was well worth it.”

“I didn’t do a lot,” says Holmgren, owner of Current Navigation. “I set the controllers for the charging rate from shore power, and making the motor run. It was just punching the right buttons and calling tech support a lot.” According to Holmgren, the controllers all have to be programmed according to boat and system-specific parameters. Grutter has two charge controllers purchased from Thunderstruck Motors.

“The manufacturer sends clone files, and you have to dump them into the controller,” Holmgren says.

Although he is an electronics technician, Holmgren is not completely sold on the benefits of hybrid electric boats. “It’s an expensive experiment,” he says. “I’m not sure he will save as much fuel as he thinks. He’ll save money if he charges at the dock, because the price of electricity in Sitka is low compared to diesel. But it could take him 24 hours to charge. He’s going to end up charging those batteries more with his engine. And when he’s running his engine, he’s going to be turning that electric motor whether he’s charging or not.”

Holmgren notes, however, that battery technology is improving and that someday electric boats may be viable.

“Maybe someday it will work. Right now it seems like the main benefit is silence, and that’s a big investment for not having to hear an engine.”

Like the companies that are pouring millions into developing this technology, Grutter thinks different. He expects to be able to charge up in 10 hours, overnight, if he can access available 240-volt lines at the harbor.

“I could charge in four hours if I can get a 50-amp charging system.” Grutter also notes that when he is anchored in a current strong enough to turn his prop, it will charge the batteries.

“The best system would be like they have in Norway on the Karoline, where you have gensets just big enough to keep the batteries charged.” Norwegian electronics company Siemens and Corvus Energy have been working to build an electric fishing boat for about as long as Grutter has been at it.

“The Tesla battery modules weigh 50 pounds for 5 kW. That’s 30 percent lighter than mine. And with cooling, they can supercharge in 20 minutes.”

At the forefront of the hybrid fishing boat movement, Grutter is not going to stop improving his system. Now that he has the electric drive motor more or less up and running, he is working on running his hydraulic system of the batteries. “I bought an electric forklift motor on eBay. It’s got all the hydraulic connections. It’s pretty much plug and play.”

And he has those Tesla modules on his mind.

Power to the People

Power to the People