Sperms to the east and killers to the west, but the Gulf of Alaska’s longline fleet is anything but stuck.
Whale predation of longline gear has been “the best-kept secret of Alaska fisheries,” says Buck Laukitis, a longtime Area M fisherman, who now fishes out of Homer.
“People are at the end of their rope, so to speak, with the whale problem.” says Laukitis. “The council has given us the ability to use a different type of gear.”
Three years ago, the North Pacific Fishery Management Council approved the use of pots on blackcod longline gear to prevent predation.
“The first year with sablefish, it didn’t work very well,” Laukitis says.
But trial and error, along with growing interest and increasing longline catch loss, have led to a growing user group of more than 30 longline boats now fishing blackcod with pots in the Gulf of Alaska. 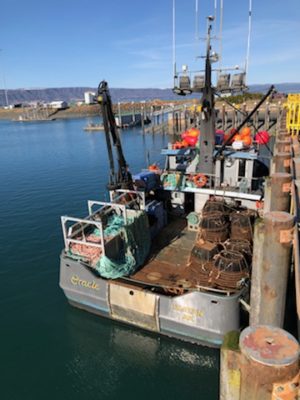 “The pots have proven to be 100 percent effective,” says Bernie Burkholder, who runs Buck and Ann Fisheries out of Kodiak, Alaska, and Astoria, Ore.
Laukitis, Burkholder and Paul Clampit make up a trio of longtime Alaska longliners who have founded the Sablefish and Halibut Pot Association. The group wants to make sure the North Pacific Fishery Management Council hears the feedback of the user group when the trial fishery comes up for its three-year review in April.
“We’ve got a three-year review coming up and we needed some representation, not only at the council but at the International Pacific Halibut Commission,” says Burkholder.
“What the group is trying to do is work through some of the problems together and have some best practices,” says Laukitis. “We definitely want some research. This is such a rapidly changing problem that the science is really way behind the fishermen.”
NMFS estimates the predation loss off longlines is about 3 to 4 percent.
“The number’s just not even close to being accurate,” says Laukitis.
“Fifty to 75 percent is probably a realistic range,” Burkholder adds.
The group is Alaska based but hopes to incorporate fishermen from California north.
“We’re here to promote this new fishery,” Burkholder says. “We’d like to see more fish caught with pots, not less. It is really important to us that we have regional balance.”
“What I learned in my time as a policymaker,” says Laukitis, who just ended a three-year term on the North Pacific council, “is that credible fishermen can say things until they’re blue in the face, but until a Ph.D signs on and says, ‘We have a problem here,’ it doesn’t become real.”
Some fishermen are worried about the lack of accounting for the whale depredation.
“If we don’t get a critical mass of boats fishing with pots, we could potentially do irreparable harm,” says Laukitis.
“These big fish are disappearing, and it was seen on the ground by the fishermen,” says Burkholder. “It’s not that they’re dying. They’re aggressive, they get on the hooks first, and the whales are eating them.”
Some fishermen report being followed by whales on every longline set.
“They’re so smart. They used to follow us,” says Laukitis. “But what happens now is we don’t even see whales anymore. They know everything about us. They see us now and they go the other way.”
It almost seems too good to be true.
“The good news is there is a solution, but it doesn’t work for every boat,” says Laukitis.
“You’re going to need bigger hydraulics,” says Burkholder. “Five-eighths- to 1-inch pots can vary from 40-60 pounds up to 120 pounds per pot. You have to have some deck space, and you have to have a boat that has some stability, which is oftentimes relative to the width of the boat.”
“It’s a relatively expensive conversion — $300,000 to $750,000, depending on if you have to put bigger generators in and increase the hydraulic system,” Burkholder adds.
But the return on investment is recognizable, especially for fishermen who see devastating predation.
“I was spending $20 grand a year on longline gear,” says Burkholder. “Once you’ve got the pots, you don’t have much pot loss. Last year we lost three pots all year long.”
And that’s with a 95 percent catch rate that targets fish by size.
“With escape ring sizes and mesh size, we’re letting the little fish swim out,” says Burkholder.
Laukitis adds that the longline halibut fleet in the Bering Sea is likely to get a chance to use pots soon, but new gear has to be a collaborative effort with other fleets to avoid bycatch.
“We don’t want to affect crab,” says Laukitis, whose F/V Oracle saw a 50,000-pound halibut loss in one trip off the Pribilof Islands from whale predation. “We’ll be working with the Bering Sea crab group. We’ll be collaborative with other groups.”
“We’re all longliners in our roots and our hearts,” Laukitis adds. “We’ve had to evolve.