Advocates for the Bristol Bay said they need to keep pressure on federal agencies for an environmental reassessment of the Pebble Mine proposal – and on ways to keep the world’s greatest salmon fishery in the national eye.

At the keynote event for the Pacific Marine Expo in Seattle, a packed audience heard updates from longtime participants in the fight to protect the Bristol Bay watershed from a proposed gold and copper mine. 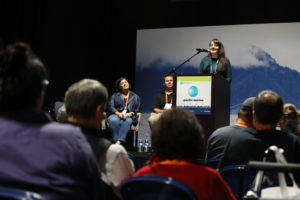 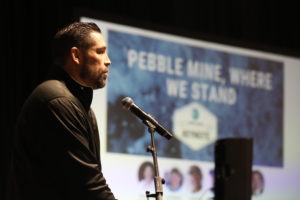 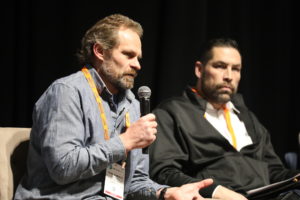 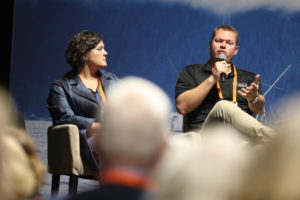 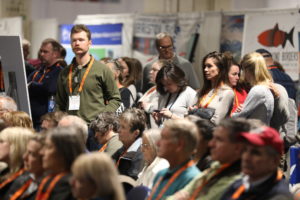 In Washington, D.C., Rep. Peter DeFazio, D-Ore., chairman of the House Transportation and Infrastructure Committee, this week asked the Army Corps of Engineers to undertake a new environmental assessment of the mining plan that the Corps moved to clear in June, reported Mike Friccero, a 39-year Bristol Bay fisherman and activist.

Despite the federal Environmental Protection Agency under the Trump administration reversing its earlier position against the mine, the U.S. Fish and Wildlife Service is also asking to revisit the mine’s potential impacts, Friccero told the audience.

In Congress, Rep. Jared Huffman, D-Calif., has an amendment to the House appropriations bill that would prohibit the Corps of Engineers from spending money to work on permitting the mine, a process that on the current timeline could be finished in spring 2020, said Lindsey Bloom, a Bristol Bay gillnet captain and campaign strategist with the group Salmon State.

On the Senate side, Sen. Lisa Murkowski inserted language in a spending bill to express her concerns about Pebble Mine, but short of a spending block that advocates want to see, said Bloom. They hope that can be achieved in conference committee, she added.

"We have a few weeks in Congress to make that happen," she said. With the corps on track to release a permit in spring it is a critical time "to stop this corrupt process," said Bloom.

The project dangers center on the future of waste from the proposed mine pit, and “the assumption that Pebble Mine can make time stand still,” said Daniel Schindler, director of the Alaska Salmon Program and the University of Washington.

Despite a projected 50-year lifespan, in reality acidic mine tailings “will be there until the next ice age” thousands of years from now,” said Schindler. The danger of planning to contain the waste dammed onsite includes dam failure – in floods or earthquakes – spilling sediment miles downstream into the watershed’s salmon spawning habitat, he said.

“There’s no plan for…who’s going to pay for this pit (maintenance) in perpetuity,” said Schindler.

“The stage is set for engineering disasters,” he said. “It’s a real effing mess in Alaska right now, in my opinion.”

It’s been a decade now since the Bristol Bay Native Corporation determined the Pebble Mine proposal poses a threat to the longtime “fish first policy” that is central to both the region’s subsistence culture and economic well-being, said corporation board member Everette Andersen.

“This is a very special place in the world,” he said. “Not just for the people who depend on it, but for the world.”

With so much at stake, Andersen said people need to focus on their common interest in pushing for Bristol Bay’s protection: “Take the politics out of this process. I know that’s almost impossible.”

Grassroots action by fishermen activists, including YouTube videos and other social media, have helped spread the word around the United States and “the boots on the ground are just amazing,” said Andersen.

At one culinary industry event in California, “one prominent chef was so proud to tell us he flew in Atlantic salmon. I wanted to kick him,” said Erickson. “So, I think there’s a lot to do about that.”

The stakes in Bristol Bay are plain to anyone who looks at the fate of other salmon fisheries in the Pacific Northwest, said Schindler.

“Take a tour through salmon watersheds here in the Pacific Northwest and you’ll see mistake after mistake. It’s our arrogance,” he said. “It’s the assumption we can do what we want to these ecosystems without harm.

Now, he added, “no matter what we do, these salmon runs are not coming back.”

Bristol Bay leaders call to close the door on Pebble Mine

Maine lobsters become the source of a coast to coast dispute