Breaking into an all-male crew. Surviving when the sea breaks in the wheelhouse. Savoring time at home.

The FisherPoets readings are a traditional last-day feature of Pacific Marine Expo. Author Laura Hartema read from “Bering Sea Strong,” her account of working in Alaska waters in the 1990s. 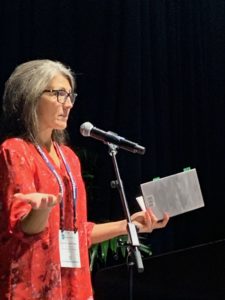 “I had landed on a singles’ cruise and discovered I was the only woman who signed up,” Hartema wrote. After her initial experience, including “my close encounter with Underwear Man” in a crew cabin, Hartema had her first terrifying exposure to Bering storm and sea conditions.

Jeff Stonehill, who wrote “the Last Great Wild West Show,” an account of Cordova, Alaska fishing life in the 1970s, read his poem of setting out on. 63-foot boat with a steel whaleback house: “You’d think that would be enough.”

“How thick is this Plexi?

“Damn, should have got the Lexan…

“The windshield wiper waggles witlessly in the hole.”

“I hope that hasn’t happened to you,” Stonehill quipped to the audience. 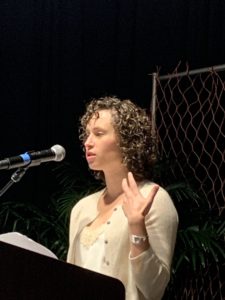 Sierra Golden’s “The Slow Art” is a finalist for the 2019 Washington State Book Award. Her poem “Some Ghosts” reflects on the now-legendary – mythical, according to official government history – rememberances of “June hogs,” giant salmon on the pre-dam Columbia River.

In “Gracias,” Golden salutes migrant cannery workers. In “Not Fishing,” she expresses the Northwest fisherman’s gratitude for a winter break: “I don’t want to hear the VHF sputter sweet nothings on Valentine’s Day.”

Guitarist and songwriter Brad Warren, executive director of the National Fisheries Conservation Center, sang of those June hogs too.

Those memories are more important than ever, said Stonehill, who sported the Bristol Bay salmon fishermen’s symbol protesting the Pebble Mine plan. The next few months may tell, Stonehill warned, if future generations will sing those kinds of sad songs about Bristol Bay.

Alaska update: Salmon landings at 13.6 million, but the fish are small; longliners have taken a third of TAC

A Little Golden Book of fisherpoetry