Just after 9 on Tuesday morning, the 55-foot steel boat Resolve caught fire at Portland's Vessel Services at the Fish Pier. 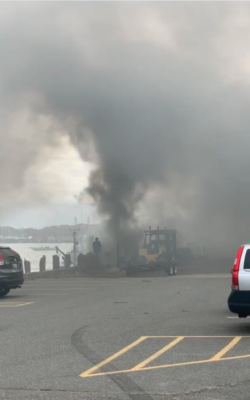 The Portland and South Portland fire departments responded quickly to the 9:30 call and had the fire under control within half an hour.

The boat, originally from Houma, La., was undergoing some welding and deck work as part of a conversion to the scallop fishery for local fisherman Mike Stinchfield, according to a representative at Vessel Services, who noted that the crew there was about two months into the conversion work before the fire.

Two people were reported to have been onboard at the time. One was treated for smoke inhalation, but no major injuries were reported.

The boat was towed up the Fore River to Portland Yacht Services around 10:45, and the Portland Fire Department was working with the U.S. Environmental Protection Agency to remove water from the boat and prevent contamination in the harbor.

Maine Rep. Chellie Pingree's office overlooks the pier, and her staff grabbed shots and tweeted about the incident from their headquarters at the Marine Trade Center.

On fire and foundered: A rough week for East Coast commercial fishing boats

On fire and foundered: A rough week for East Coast commercial fishing boats