Two people were safely airlifted after a fishing vessel ran aground near a jetty at Barnegat Light, N.J. Wednesday night, according to the Coast Guard.

Watchstanders at the Barnegat Light Coast Guard station were contacted by one of those aboard the 53-foot vessel Bay of Isles, who reported the boat had gone aground at one of the Barnegat Inlet jetties and was taking on water.

With the vessel hard near the outer reach of the jetty, the Coast Guard determined the Barnegat Light boat crews could not safely reach them to evacuate. Coast Guard Sector Delaware Bay watchstanders then called to launch an MH-65 Dolphin helicopter aircrew from Air Station Atlantic City to make the rescue.

The helicopter crew safely hoisted the two and transported them to the air station without injuries, Coast Guard officials said. The Bay of Isles remained stuck there at dawn Thursday as boats from the Barnegat Light fishing fleet headed out for the day. 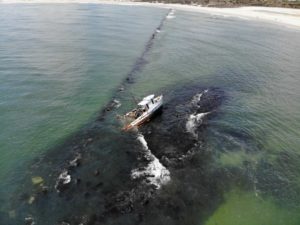 The Bay of Isles hard aground on the old south jetty at Barnegat Inlet, N.J., May 7, 2020. Photo by Greg Cudnik/Fisherman's Headquarters.

The vessel grounded on the old south jetty of Barnegat Inlet, a mostly-submerged line of traprock that was reduced during reconstruction and realignment of the inlet with a new south jetty, completed in 1991.

An older wooden boat, the Bay of Isles began breaking up in the surf Thursday and was being monitored by Coast Guard personnel over concern for a reported 500 gallons of diesel fuel on board, with the potential for pollution. The boat is grounded at the north end of Long Beach Island, a summer resort area with hopes of a partial reopening from the covid-19 lockdowns in time for the summer beach season. The inlet leads into Barnegat Bay, with its extensive wetlands, wildlife habitat, fisheries and a big recreational boating industry.

Drone video shot Thursday by Greg Cudnik of the Fisherman's Headquarters in Ship Bottom, N.J., showed the Bay of Isles beaten down at the stern by surf.

"We are closely monitoring the situation and working with the owner of the vessel, a salvage company, and state and local agencies." said Lt. Cmdr. Fred Pugh, chief of incident management at Sector Delaware Bay, in a statement issued Thursday evening to update the situation. "The protection of our waterways in the region are our foremost priority in this case."