The crew of the Lady Gertrude never saw it coming. At 1:50 a.m., on a fair-weather night in August 2016, they were suddenly sinking, and fast.

They scrambled into survival suits and had the good luck to be near another New Jersey scallop boat, the Mazey James. On his friends’ boat, Erik Myklebust took video with his phone as the Lady Gertrude — his family’s biggest investment in the business — slid under the waves, its generator and lights still on until the end.

“The shaft snapped somewhere in the stuffing box, and it slipped right out. With a 6-inch hole, 10 feet below the waterline, that’s like opening up a fire hydrant and saying, ‘Make it stop,’” recalled Erik’s father, Hans Myklebust.

Grateful for the safe return of their son and crew, Hans Myklebust and his wife, Barbara, then faced the business imperative.

Within days of starting the search, Myklebust heard from his friend Tony Fillinich in Golden Meadow, La. Myklebust had met Fillinich, a master at working with boats and steel, back in the mid-2000s when he bought a smaller boat there, the Capt. Caden.

“Tony called and said, ‘I think I found the boat you want.’ So I drove down there,” Myklebust said.

At the Allied Shipyard in Golden Meadow was the former Hanson Michael, a 78' x 23' x 10' shrimp boat, built of 3/8-inch steel throughout at Allied’s Larose, La., yard in 1995. Powered by a Caterpillar 3412 turning 540 hp, it looked to Myklebust like it could handle both scalloping, and mixed-trawl dragging and squidding off the Mid-Atlantic.

When Myklebust went to see Fillinich, he was surprised to find his friend flat on his back, recovering from a spinal disc injury, but looking forward to a new project.

“I just have to have my surgery, and I’ll be right with you,” Fillinich promised.

Myklebust purchased the boat Oct. 14, starting a four-month rebuilding project from keel to outriggers. Allied allowed him and Fillinich to work on the boat with their own materials, hiring some yard workers, while Myklebust did the welding and Fillinich — back in action and only a little slowed by a back brace — orchestrated the project.

“We worked from sunup to sundown,” said Myklebust. “Back brace and all, he kept going. He did all the torching, the plating, the planning.”

In time Fillinich felt confident enough about his back to insist on handling some climbing tasks himself, shimmying up the outriggers.

“I thought, ‘If his wife sees this, she’ll kill us both,’” said Myklebust.

The Swaggy B with a new red hull and white topsides, powered by a Cat 3412. Barbara Myklebust photo.

In midwinter, they were done. The Cat and Twin Disc 6:1 gear were ready to turn the four-blade propeller in a 66-inch Kort nozzle, for a cruising speed of 10 knots, burning 18 gallons per hour. The tanks would hold 8,000 gallons of fuel and 3,000 gallons of fresh water. The newly rebuilt and paneled fish hold had a 50,000-pound capacity, enough for those big squid trips.

With its newly painted red hull and white topsides, the boat was now Swaggy B, a nickname bestowed on Barbara by their son Erik. It was time to go. Heading down Bayou Lafourche to the Gulf of Mexico, the Cat engine hummed with no trace of smoke, and Hans Myklebust headed toward Florida.

About 24 hours out, the engine failed on the Sunday morning of Feb. 13, dropping a piston. They were 180 miles south of Fort Morgan, Ala.

“I was surprised the VHF signal worked,” said Myklebust. But the Coast Guard got the message, and dispatched the cutter Stingray from Mobile, Ala. Around 1:50 a.m. That night, it took the Swaggy B under tow.

Safely back, Myklebust got connected with Jerry W. Bailey Jr. of Construction Solutions International, a Gulf Coast marine services and construction company. Bailey arranged for the Swaggy B to be moved so Myklebust could deal with the propulsion meltdown.

“What a nice man he is,” said Barbara Myklebust, who had to follow the crisis with intermittent telephone calls. “He was so comforting. He said, ‘Don’t worry about anything, I’ll get you where you need to be.’” 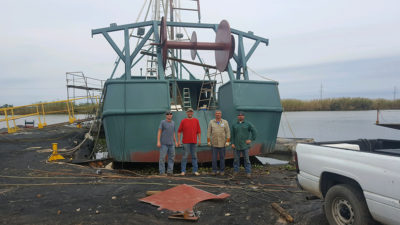 Three generations of Myklebust fishermen with the Swaggy B in Louisiana. Barbara Myklebust photo. 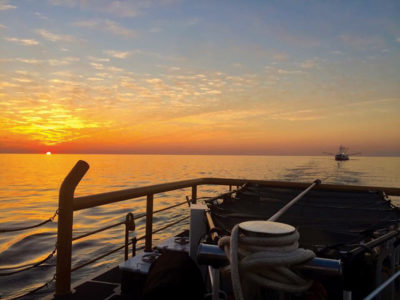 The Swaggy B under tow by the Coast Guard cutter Stingray in the Gulf of Mexico. Hans Myklebust photo. 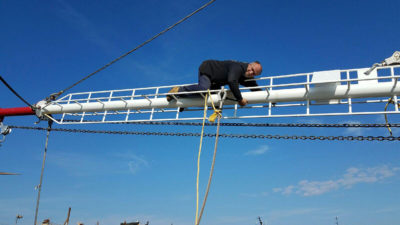 Over the next few days, a post-mortem on the engine revealed it had dropped a cylinder — and had been patched up over the years with non-Caterpillar parts, according to Hans Myklebust.

“I just had the fish hold all done, and I had to cut it all apart,” he said. A replacement Cat 3412 arrived, and in mid-March the Swaggy B was under way again, rounding Florida and up the East Coast.

On the last day, the wind gusted 40 to 50 mph, and Myklebust gave the new engine full throttle to race past the mouth of Delaware Bay. Close to midnight on March 22, a small crowd of family and friends greeted the boat as it came in Manasquan Inlet and pulled up at the Fishermen’s Dock Cooperative in Point Pleasant Beach, N.J.

Within a week, the Swaggy B had her first trip for fluke, as Myklebust tested gear and appreciated the boat’s power, maneuverability and stability.

Four months later, he and Barbara recalled the struggle, a day before setting out for summer squid trip.

“It’s been a roller coaster. I’m not over it,” Barbara said. “We want to overcome and succeed. It’s been an uphill battle, trying to move on.”

For all their work, the couple now owns a boat that would cost around $2 million as a newbuild on the Gulf of Mexico coast. That make-do ethic is part of the Scandinavian-American fishing culture Myklebust grew up in with his father Louie, 78.

“I started with lobsters when I was 10,” said Myklebust. That was on his father’s boat Viking, a 68-foot wooden hull from North Carolina builder Paul King. “They used to take me out 100 miles in that thing… I think I got paid full share when I was 14.”

“I make all of the gear myself, with a little help from my father,” who does gear work for other co-op captains, said Myklebust. He’s hoping this is his last boat project, but he would recommend looking on the Gulf Coast to any fisherman willing to invest the time and energy.

“I didn’t want to be looking up East. I didn’t want to buy someone else’s mess,” he said. With all the economic and regulatory pressure on New England fishermen, more boats are suffering from deferred maintenance. “There’s not enough time to take care of them.”

Boat of the Month: Lilly Rose