Scandies Rose: Raising funds for the families of those lost at sea

The decade closed with another tragic loss of life when the Scandies Rose sank on New Year's Eve on its way to the Bering Sea from Kodiak, Alaska.

Still missing from the seven-man crew are the captain, Gary Cobban Jr.; his son David Lee Cobban; Arthur Ganacias; Brock Rainey; and Seth Rousseau-Gano. Crew members Dean Gribble Jr. and John Lawler were rescued from a life raft by a Coast Guard crew out of Kodiak.

On New Year's Day and the days that followed, Facebook flowed with outpourings of grief, memories and requests for prayers for the five left behind.

A Facebook fundraiser for the surviving family members has raised nearly $45,000 in less than a week. 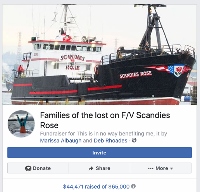 "Never did I think this thing would take off as fast as it did," wrote Marissa Albaugh, who started the fundraiser with Deb Rhoades. "These families are so deserving of this and so much more. I’m so glad to have a team of people working with me now to get these people taken care of."

Family member Barbara Cobban also established a Scandies Rose remembrance page on Facebook for the community to share memories of the crew.