Surging cruise ship traffic, ultra-large containerships and a rebuilding fishing fleet are driving more than $500 million in long-term improvements at the Port of Seattle – even as real estate and housing demands put pressure on the maritime economy.

The process is underway at Terminal 46 near the city’s Century Field sports complex, where port planners are designing “a flexible marine transportation facility” – the northern third to be a new cruise port terminal, the remaining area to continue handling cargo, said Stephanie Jones Stebbins, managing director of the port’s maritime division, at this week’s Pacific Marine Expo.

It’s part of a $345 million capital plan that includes a joint venture with the Port of Tacoma to the south improving Terminal 5 with deeper berths and rail connections to serve the new generation of 1,200-foot-plus containerships. To the north on Elliott Bay, $35 million in upgrades to Terminal 91 are planned by the end of 2021 including pier improvements for the port’s larger fishing vessels. 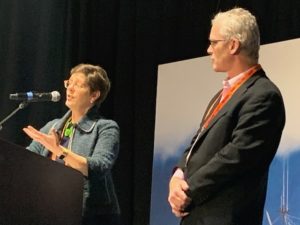 That’s needed because port officials are increasingly concerned about pressure around Ballard and North Seattle from the relentless pressure for more housing a modernized commercial space, fueled by the region’s booming tech sector.

“There’s a lot of gentrification here. There’s not a lot of space for light industrial and rents are climbing steadily,” said McFadden.  Port officials are getting inquiries from businesses interested in finding space around Fishermen’s Terminal and Terminal 91, he said.

Port planners are looking for ways to synthesize that tech strength with the city’s legacy maritime industries. One step is a “maritime innovation center” to be co-located with the new north end improvements, with $10.55 million in funding including $5 million from the state of Washington.

The center will be a home for the “blue tech sector,” a space to support emerging maritime technology and workforce development, said McFadden. The idea is modeled on centers in Iceland and the Netherlands, including Port XL, a “maritime accelerator” in Rotterdam, he said.

“There are 60 different (tech) accelerator programs in Seattle. Not one of them is focused on maritime,” McFadden added.

The port is meanwhile keeping a focus on its fleet of 226 fishing vessels with a direct annual payroll of $313 million. As the fleet is recapitalizing with new construction, “we need to get in front of that,” said Fishermen’s Terminal general manager Kenneth Lyles.

“These fishing companies need to turn over their fleets,” he said. “We’re right in the middle of that now. We’re trying to provide the infrastructure.”

In all of this port officials say they are acting as advocates for preserving the city’s maritime industrial land too.

“There are folks who would pay a lot to put something else there,” said Jones Stebbins.