Fishermen are regularly asked, and often told, that they need to adapt their business in order to preserve, conserve, or maintain fish stocks and the health of the ocean.

They comply despite the high costs to their business and with little reward for their efforts. They feel first-hand the impacts of the poor decisions people make on land and are held to a different standard than many of the other businesses that operate on the ocean.

Fishermen spend their time on the ocean searching for healthy seafood to land while cruise ships create noise pollution, impact marine life, and maintain a massive carbon footprint with little regard for its impact to the health of the ocean or other businesses that depend on thriving fish stocks.

Threats to the ocean from cruise ships include sewage, gray water, bilge water, ballast water, hazardous materials, solid wastes, and even oil spills. The largest cruise ship is the twice the length of the Washington Monument!

In Monterey, Calif., home to the Monterey Bay National Marine Sanctuary, many citizens are so concerned with the influx of cruise ships in the past couple of years that they have taken to protests and petitions, but the city continues to move ahead regardless of the outrage and 20 cruise ships are planned to visit in 2020.

As stated by NOAA on its Monterey Bay National Marine Sanctuary web page, “The cruise line industry historically, has had a relatively poor record regarding environmental violations.”

Yet the ships, averaging about three football fields, are still able to maneuver in the sanctuary. And, despite compromises like random inspections intended to mitigate illegal activities, cruise ships are given 24-hour notice before the inspection. 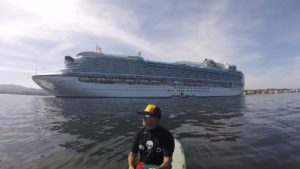 Brent Allen is a lifestyle sports race host, outdoor industry ambassador, and environmental advocate operating Brent Allen Outdoors. Since June 2017 he has also been hosting protests at cruise ship anchor points near the Monterey Bay National Marine Sanctuary to literally stand up to the cruise ships.

He and other advocates paddle out on their stand-up paddleboards in protest of the large ships and in turn are also producing photos that portray the absolutely staggering size of the cruise ships compared to people on paddleboards.

In a recent post on his Instagram page, accompanied with by an impressive photo of a recent experience confronting a cruise ship, Allen says, “While this vessel was coming directly at us 22 stories tall and three football fields long and 160,000+ tons… it was a practical experience of space and distance with something this big.”

He goes on to say, “I said we weren’t moving, and we didn’t. It stopped 100 yards short and dropped anchor. These cruise ships are progressively ruining this sanctuary and we are not going to have it.”

Allen and others would love to learn more and partner with the fishing community in the area. The next cruise ship arrives in Monterey this Friday, Nov. 15, at 7 a.m. and departs at 4 p.m. You can learn more about the efforts and contact Brent at Brent Allen Outside.

Monterey is not the only coastal community concerned with cruise ships. Communities in coastal Maine like Portland, Bar Harbor, and Rockland are wondering if the benefits to the economy from cruise ships are worth the major impact to the environment.

Monique Coombs is the Seafood and Marine Resources coordinator for the Maine Coast Fishermen's Association. She has worked in the fishing industry for a decade, is married to a lobsterman and lives on Orrs Island, Maine.

Power surge: With Vineyard Wind on approval track, 10 more reviews in the wings

Biden administration can build partnerships around climate and fisheries

Power surge: With Vineyard Wind on approval track, 10 more reviews in the wings

Biden administration can build partnerships around climate and fisheries

Mail Buoy: Offshore and off course