Home / News & Views / National & International / Engine room fire: What would you have done?

Out of 15 marine accidents featured in the National Transportation Safety Board’s recent compendium of accident reports, seven — or nearly half — involved commercial fishing boats. Three accidents occurred in the Bering Sea, two in the Gulf of Mexico and two in New England waters. They included three fires, two collisions, a capsizing, and grounding out, and took place between May 12, and Sept. 18, 2018. Some of those accidents resulted in the boat’s sinking.
One advantage of a collection of incidents like the ones in the NTSB’s latest report is that it’s possible to see elements that are common from one accident to another. A boat owner seeing those connections might then pause and ask themselves: “Does that apply to me, to my boat?” 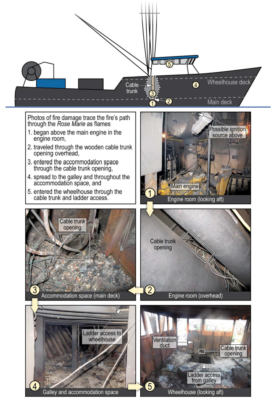 Tracing the fire’s path through the Rose Marie. (Click to enlarge.)

Fires and collisions are a couple of examples among the seven accidents that had common elements allowing the situation to get out of control. Two of the engine-room fires were on the 87-foot trawler Rose Marie, fishing off of Chatham, Mass., and the Logger, a 105-foot fish tender traveling in the Bering Sea. Neither vessel had a fixed fire-extinguishing system but used grenade-type extinguishers, which did not put out the fires. In addition, openings to the engine room were not closed, thus reducing the effectiveness of the extinguishers.

After an explosion in the engine room, the Logger sank. The Rose Marie was declared a constructive total loss after being towed to port.
A common thread in collisions and near-misses is a lack of vigilance, as was the case in the accidents involving the shrimper Lady Toni’s encounter with the sportfishing boat Got’M On about 105 miles east of Corpus Christi, Texas, and the encounter between the 91-foot scalloper Polaris and the 820-foot oil tanker Tofteviken about 30 miles south of Long Island, N.Y.
The NTSB determined that the probable cause of the collision between the Polaris and the tanker was “the failure to maintain a proper lookout by the mate on the fishing vessel and the failure to identify the risk of collision by the third mate on the tanker.” (The mate on the Polaris, who was supposed to be on watch, was cleaning the wheelhouse.)
It was the same situation with the Lady Toni and the Got’M On, which sank as a result of the collision. The NTSB said the probable cause was “the failure of the Lady Toni captain to take appropriate action to avoid the collision, and the Got ‘M On captain’s failure to safely operate his vessel by leaving the bridge unattended.” That’s a long-winded way of saying neither boat maintained a proper lookout.
But take a look and ask yourself, “What would I have done in that situation?”