The state of Maine has granted two new leases to Portland-based Whole Oceans LLC that move the dial for the company to continue building out its new land-based salmon farm in Bucksport, about two hours north of Portland. The leases for submerged land around the onshore aquaculture site grant the company access to outfall and intake pipes for maintenance, repair and modification. 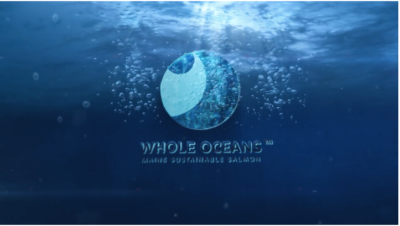 Whole Oceans purchased 104 acres of a defunct paper mill site for its first foray into recirculated aquaculture systems in February 2018. In Maine, however, rights to land that is covered in water is publicly owned to ensure access to fishing, hunting and navigation. Any pipelines, utility cables, dredging or outfall/intake pipes located on submerged land require a state lease or easement for access.
Whole Oceans’ renewable lease is good for 15 years and includes roughly 4,500 square feet of riprap along the shore and the location of an outfall pipe, plus an additional 1,800 square feet jointly leased with Bucksport Mill LLC, which includes another outfall pipe.
Any changes to the former mill’s riprap or outfall pipes are subject to approval from the state Department of Environmental Protection and the Army Corps of Engineers.
“We are excited to continue to make progress towards breaking ground on the project,” said Jacob Bartlett, CEO of Whole Oceans. “The company is currently hiring people with decades of industry experience for leadership positions.”
In the last month, Whole Oceans has hired an archaeological expert to review the property and its history in an effort to ensure that construction doesn’t disturb historic remains that may be located on the site. It also announced the hiring of a former Marine Harvest freshwater manager as its new hatchery manager. Orfa Cabrera has 30 years of experience in the salmon farming industry, starting with hatchery work in her native Chile.
Whole Oceans is the second company to launch plans for an RAS in Maine in the last two years. The first, Nordic Aquafarms, has faced setbacks from a vocal minority in the community. Whole Oceans, meanwhile, has experienced a more welcoming community in a town accustomed to blue-collar industrial jobs. But the company has faced transitions between three CEOs in 18 months.
Its founding CEO, Rob Piasio, was born and raised in Maine and helped the company establish itself in Bucksport in February 2018. Jason Mitchell, former production director at Bath Iron Works, took on the role of Whole Oceans COO in May 2018, then was named CEO in October to oversee the preconstruction and early permitting phase. Jason Bartlett took the helm in August 2018.
The company has yet to begin construction for phase, which was projected to cost $75 million and produce 5,000 metric tons of tank-grown Atlantic salmon.