Blue Harvest Fisheries said Thursday, Feb. 20, it had finalized the acquisition of a dozen vessels and 27 groundfish permits from the family of imprisoned fishing magnate Carlos Rafael, closing on a long-sought goal of both the company and New Bedford civic and industry leaders.

“Blue Harvest is committed to carrying on the best aspects of New Bedford and New England’s storied fishing traditions, and we’re excited to expand our work on the waterfront,” said Keith Decker, Blue Harvest CEO and president, in announcing the purchase. “With our resources and seafood expertise, we are ideally positioned to be a productive member of the Northeast groundfish fishery for years to come.”

Under an agreement with NMFS regulators and law enforcement, Rafael agreed to divest all of his fishing assets and exit the industry as he continues to serve a nearly four-year federal prison sentence for tax evasion and violating fisheries law.

The final deal keeps a significant part of New Bedford’s groundfish fleet and its jobs in the city. That ends a profound anxiety in the East Coast’s oldest port that started with news of Rafael’s arrest in February 2016, after undercover federal agents posing as prospective buyers of his fishing business captured Rafael on tape explaining his long-running system of falsifying catches and off-the-books cash revenue.

“I appreciate that NOAA gave our arguments careful consideration in fashioning a settlement that opened the door to the acquisition announced today, which will achieve the outcome we sought,” New Bedford Mayor Jon Mitchell said in a joint statement with Blue Harvest. “I look forward to supporting Blue Harvest’s plan to grow in New Bedford and create more jobs for our residents.” 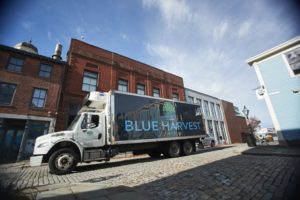 Groundfish landed from Blue Harvest’s newly acquired vessels will be handled at the company’s SQF-certified 160,000-square foot seafood processing facility on the city waterfront. The company says it has already invested in millions of dollars in upgrades, including the ability to directly offload vessels, more freezer capacity, and half a dozen high-capacity processing lines.

Decker says the expanded fleet will include five to six crew members per vessel, and likely increase the company’s 425-strong workforce with an additional 75 jobs by the end of 2020.

When the new groundfish season starts in May, Blue Harvest will be pursuing its strategy of targeting “severely underfished” species, including haddock, ocean perch and Atlantic pollock. Meanwhile, as the company focuses on plentiful species, “the majority of our cod will be left in the water this year,” Decker said.

“Eighty-five to 95 percent of core fisheries are left in the water. I’ve never seen any other First World country that leaves so much in the sea,” said Decker, a 30-year veteran of the industry and former CEO of High Liner Foods. “There is a home for these fish.”

But building them into a sustainable business line requires a different scale and vertical approach, said Decker. The Northeast industry has been held back by a lack of capacity, processing and access to markets, and Blue Harvest’s goal is to integrate catching, processing and marketing internationally.

“You need a large, well-financed company to do marketing,” said Decker. In the Northeast, volatile landings have led to market collapse, he said.

“The first thing that the customer wants is supply, 52 weeks a year,” plus quality, sustainability and price stability, said Decker. Foodservice and restaurant buyers, for example, plan for 90- to 180-day menus.

“We need to produce enough fish to guarantee supply,” he said.

Decker said Blue Harvest is committing to traceability and transparency with its customers and regulators, including 100 percent dockside monitoring of landings and hiring an independent firm to conduct monitoring.

“As a member of the Sustainable Harvest Sector, Blue Harvest captains will adhere to catch monitoring and control requirements that go beyond federal rules,” the company said in its announcement. “In addition, the sector’s membership has authorized its board to require additional monitoring should an elevated risk of misreporting ever arise.”

The company is working toward electronic monitoring on its vessels, to help develop that technology for wider use throughout the industry — at a time when the New England Fishery Management Council is considering 100 percent at-sea monitoring of groundfish trips.

In early January, New Bedford brothers Richard and Raymond Canastra of the Buyers and Sellers Exchange seafood auction ended their attempt to acquire the Rafael boats, after mounting a competing effort. They cited mounting legal costs and concerns over the cost of upgrades that would be needed for some of the vessels.

Decker said Blue Harvest will invest as needed in the boats it keeps and sell others for use in other fisheries.

“We’re looking for vessels that can fish year-round,” he said.