For nearly 50 years, improvements in hydro-acoustic systems have been providing skippers better understanding of the fishery resource.

To this day, the survey process by acoustic waves remains the only technology capable of unlocking the mysteries of the underwater environment. Driven by the combined expectations of fishermen seeking to optimize their operations and by scientists looking for more relevant stock assessments, manufacturers have developed increasingly sophisticated sonar and sounder product lines.

For several years iXblue has been tackling the major challenge of providing maritime players with a more objective and realistic vision of the resource through ambitious technological developments leading to the high-resolution "3D Volume Sonar"  SeapiX.

In 2020, based on feedback from operators, a new major technological milestone was reached, consolidating several years of R&D in order to reconcile the two contradictory "values" of a wide coverage of the environment and high volumetric resolution capable of discriminating biomass individually while geolocating it. 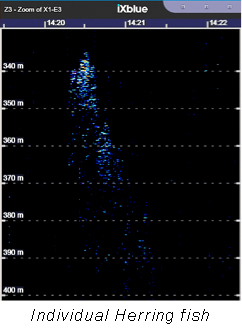 By further optimizing its SeapiX system by multiplying the number of beams (X4) and finely sampling the biomass in each beam, the amount of metrological information has jumped by a factor of 4 (reaching 680,000 Voxels in real time, "Voxel" being comparable to a "Pixel 3D"), making SeapiX a unique system on the market (a conventional sounder produces 2,500 Voxels in real time).

From an operational point of view, a complete redesign of the visualization processes allows this data flow to be processed and displayed. Supported by a brand new software platform for visualization (SeapiX-CorteX) and system control, the "Echograms" and "Sonar Views" offer total display flexibility with the effect of "Acoustic Loupes" allowing, for example, the simultaneous visualization of individual Herrings or Whiting at depths of more than 400m, while displaying near-surface mackerels with homogeneous and therefore comparable resolutions and metrology. 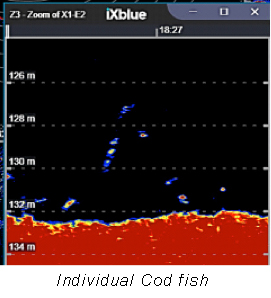 This new capability changes the habits of skippers in their perception of the abundance and discrimination of the species. Until now, several frequencies of acoustic sounders had to be used, even "Broad band" sounders. Now, the rich sampling offered by this new technology makes it possible to evaluate the biomass present over a wide range of depths (from 2m to 400m) offering objective analysis.

This accuracy of sampling in "Voxels" of small volumes of the biomass proves to be a decisive factor for the near-bottom trawling activity. In this very sensitive context, which consists in discriminating the individual echoes of fish at less than 2m from a strongly echogenic bottom, the treatment of multiple small Voxels makes it possible to limit the unwanted effects of the bottom in the discrimination of the biomass, and thus to obtain a more realistic quantitative estimate and TS characterization. 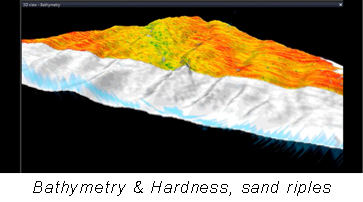 Now benefiting from specifications close to the best hydrographic multibeam echosounders, Bottom Trawlers have a high-quality bathymetry in which the biomass is correlated to the ecosystem characteristics, bringing safety and reduced impact on the trawl bottom.

The very latest software version of SeapiX ("Curry release") has proven its efficiency in the hands of Stein Magnar, skipper of the pelagic vessel "Gerda Marie" during the month of October.

Stein came back its holds full of 1200 Tons of herrings and set a new record in Norway:  with a "Full cargo" in only 14 hours of fishing operations and 3 trawl hauls perfectly targeted with his SeapiX! As shown in the image below, the new "Pelagic mode" of SeapiX offered him a new vision of the distribution of schoals all around the vessel (Port and Starboard F & R and lateral) with a unique resolution, enabling a precise, targeted and efficient catch. 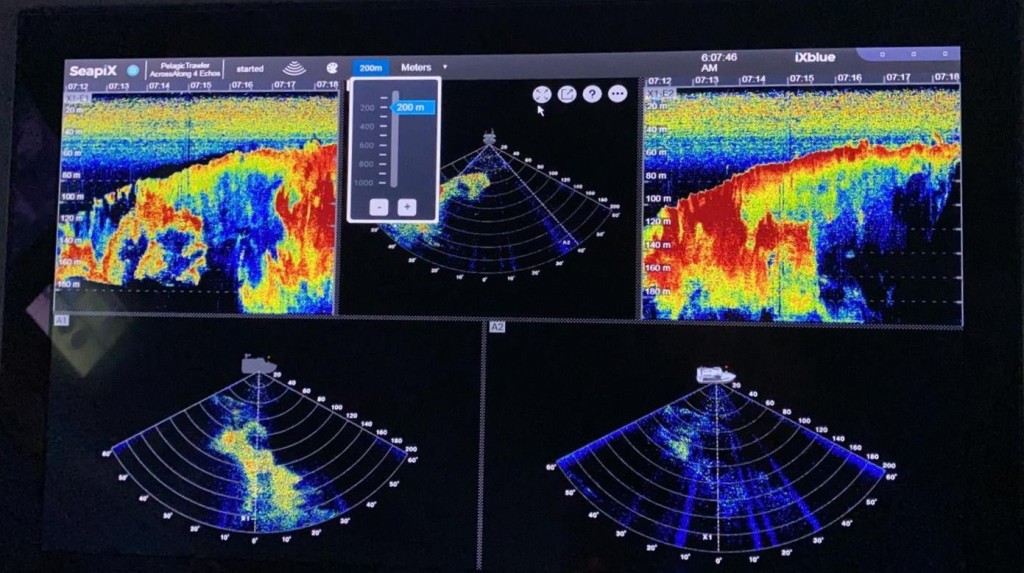