Acoustic sensors on buoys and an undersea drone will be used to map out the movements of endangered northern right whales, marine mammals and fish around offshore wind energy sites, in a joint project with wind developer Ørsted and marine science institutions.

Ørsted on Wednesday announced the “Ecosystem and Passive Acoustic Monitoring” project is launching in cooperation with Rutgers University, the University of Rhode Island and Woods Hole Oceanographic Institution, in addition to the company’s 2019 agreement to support Rutgers research related to wind energy development.

Rutgers will supply a Slocum electric glider, an undersea probe that can operate autonomously for weeks at a time, periodically surfacing to transmit its data back via satellite link. Now widely used in oceanography, the glider technology will be a first for Ørsted, one of the pioneer companies in European offshore wind.

Findings from the study will be used “to better protect the North Atlantic right whale during survey, construction and operation phases of their U.S. offshore wind farm portfolio,” the company said in a statement. ”The ECO-PAM project will ensure the company can act to solve the global climate crisis, while preserving local ecosystems.”

With only about 450 animals now surviving, northern right whales can be harmed in ship strikes and fishing gear entanglement, and NOAA is intently focused on protection. The risks were underlined this month when one of four newborn whale calves was struck and gravely injured by a vessel off Georgia.

The whales migrate past offshore energy sites leased by Ørsted and other developers, and the potential for them to be affected by construction and operation of turbine arrays is a concern for wind power advocates and critics alike.

The whales are already a consideration for designers and shipbuilders working on the first generation of crew transfer vessels for servicing turbines. NOAA rules for dynamic management areas – shifting speed limit zones that track the whale movements – limit vessels over 65 feet to 10 knots or less.

The main goal of the study is to understand the whales’ habitat, their numbers, distribution and seasonal movements within Ørsted’s lease areas, from southern New England down to New Jersey and off the Delmarva coast.

Oceanographic data from the project could help with weather forecasting and severe storm prediction, the company says.

During the three-year project, two acoustic buoys deployed by WHOI and one from URI will collect data, with the institutions advancing localizing and detection methods.

“The technology exists now to acoustically detect and track marine mammals such as the North Atlantic right whale with fixed and mobile systems and this project will demonstrate this technology,” said James H. Miller, Professor of Ocean Engineering and Oceanography, University of Rhode Island. 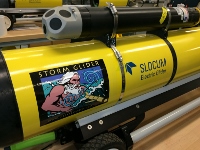 Gliders can carry instrument packages and sensors in an internal bay or externally. Kirk Moore photo.

The Rutgers glider will operate for long missions in and around Ørsted lease areas off New Jersey. Along with supplying data for the whales study, “the environmental variables collected on these glider missions will be fed directly into national data systems that provide vital ocean information for improving the prediction of marine-driven weather, such as coastal storms,” said Joseph F. Brodie, director of atmospheric research at the Rutgers University Center for Ocean Observing Leadership.

The glider and buoys will carry acoustic receivers, and the signals will be shared with existing networks including the Mid-Atlantic Acoustic Telemetry Observation System. The system regularly tracks acoustic tags, or “pingers,” that ocean scientists use to monitor fish moving through the region.

Some of those movements include commercial fishing species, so the acoustic study could further that understanding, according to Ørsted. The company has a working relationship with the fishing advocacy coalition Responsible Offshore Development Alliance, agreeing to work cooperatively on research of mutual interest.

“Our project will help to minimize the impact of wind farm construction and operation on whales so that both we and the whales can reap the long-term benefits of clean energy,” said Mark Baumgartner, a senior scientist at Woods Hole.