Formosa Plastics Corp., a petrochemical company, has agreed to pay $50 million to settle a Texas lawsuit for Clean Water Act violations. A group of Texas residents filed the suit after the corporation’s Point Comfort, Texas, plant discharged billions of plastic pellets into Lavaca Bay and Cox Creek.
It is the largest ever settlement of a Clean Water Act violation and five times the previous largest settlement of a Clean Water suit filed by private individuals. 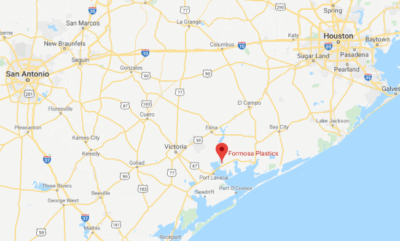 “A settlement of this size sends a powerful message to corporate polluters – there’s a steep price to pay for flagrant, chronic violations of laws that protect our environment,” said Texas RioGrande Legal Aid Attorney Erin Gaines, who represents a plaintiff in the case. “With plastics pollution of our oceans at a crisis, the message comes at a vital time.”

None of the $50 million settlement will be awarded to the plaintiffs. The damages are to be paid out over five years into a fund that will support projects that reverse the damage of water pollution in Texas’ Calhoun County.
“Years of fighting to protect the natural resources of the Lavaca Bay-Cox Creek area have finally paid off,” said Diane Wilson, former shrimper, NF Highliner and a plaintiff in the suit, along with members of the San Antonio Bay Estuarine Waterkeeper. “We look forward to working with Formosa to restore the health of our environment and make sure it stays pristine.”
U.S. District Judge Kenneth M. Hoyt ruled for the plaintiffs after hearing the liability phase of the case and still must approve the settlement.
Funded projects include: