Making the grade: Gulf shrimpers take on new tech for a premium product

“My father always told me people don’t come to us just to buy another piece of equipment, they come to us with problems they want solved,” said James Kerian, whose grandfather started Kerian Machines in Grafton, N.D., while managing a potato warehouse. 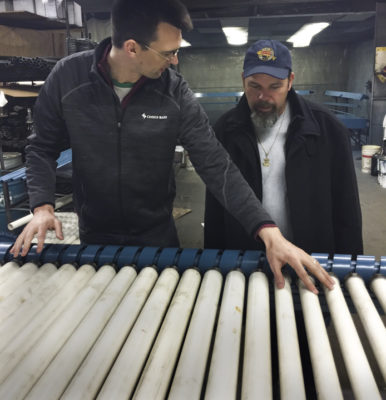 The company founded on a potato sorting machine and located just 50 miles from the Canadian border is now building a product for the bayou for the second time. Three decades ago, Kerian Machines developed a grader for the Louisiana crawfish industry. Montegut shrimper Lance Nacio, owner of Anna Maria Shrimp, asked the Kerian crew — with help from Louisiana Sea Grant — to develop a shrimp grader to be used onboard for heads-on shrimp in the Gulf of Mexico fishery.

Nacio has been experimenting with a Canadian-built head-on grader for a number of years. He heard of Kerian Machines from a friend in the crawfish business and approached Thomas Hymel of Louisiana Sea Grant with the idea.

“We packed more than 30 pounds of shrimp and took it to North Dakota to see if their machine would handle the size-grading without harming the quality of the shrimp,” Nacio says. “The shrimp were a variety of sizes, from 16-20 count to 51-60s.  We ran the mixed-sized shrimp through the machine six or seven times. Each time it worked perfectly and no damage to the shrimp.”

The advantage to sorting on-deck is to have control over grading and uniformity of size for retail markets. It puts the quality of the product back in the hands of the fishermen.

“The industry right now needs anything they can get to squeeze an extra penny out of the shrimp. It is all about the boat,” says Don Schwab, owner of Creative Supply and Solutions, a shrimp consulting business based in Metairie, La. “If the Kerian Machines head-on shrimp grader can tighten up the uniformity of the product it will add value for the fishermen. The boats are so underpaid for the product they need anything they can get to give them more value.”

Schwab is confident consistent, uniform grading of head-on shrimp will be beneficial for combating inexpensive imports. It will also add consistency to an industry that already grades both head-off and peeled shrimp.

“When the shrimp hit the deck, the uniformity ratio is all over the board, everything from 16-20 on up. If you can sack or box head-on shrimp to a uniform size, it is going to add more value to the product. It comes down to whether this will be cost-effective," Schwab says. “If the payback is three to five years, I don’t think it is going to work.”

Nacio is hopeful the Kerian Machines grader will outperform the ones he's been testing for the last few years and pay for itself in a hurry.

"I was always tinkering with them to make them work better, or they were breaking down because they had so many moving parts," Nacio says. "This new system is so simple that I am hopeful that it will be able to pay for itself within the first year.

A model of the new shrimp size-grader will be on display at the 2020 Louisiana Fisheries Forward Summit at the Pontchartrain Center in Kenner, La., on March 11.

Ed Lallo is the editor of Gulf Seafood News and CEO of Newsroom Ink, an online brand journalism agency. He is also owner of Lallo Photography based in Chapel Hill, NC.

Jessica Hathaway is the editor in chief of National Fisherman. She has been covering the fishing industry for 14 years, serves on the Alaska Seafood Marketing Institute’s Communications Committee and is a National Fisheries Conservation Center board member.