Notus has been a major supplier of wireless trawl and seine monitoring systems since 1992. For the past five years, the company has been developing a sensor that will revolutionize the way many of its customers fish. Introducing the Notus Net Sounder.

The Mantis Sounder offers high tech at a good price. These features plus a removable battery makes the sensor a necessity. The system consists of a receiver/computer in the wheelhouse connected to a hydrophone mounted 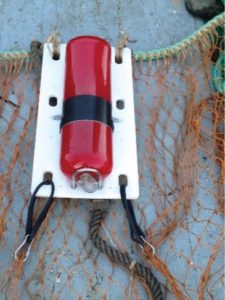 in the hull. This shipboard equipment communicates wirelessly to a sensor mounted on the trawl. A sounder image of fish entering the trawl and footgear clearance is transmitted back to the vessel wirelessly.

For fish detection, the Mantis uses dB logging, which fine-tunes the sounder image. This means the captain can adjust the sounder gain while the Mantis sensor is on the trawl. To ensure a stable link to the vessel, the sensor uses FM modulation.

The most common complaint with any net sounder is battery life. Notus has responded by using high-capacity NiMh batteries (14v) in a removable pack. Each sensor is delivered with two battery packs and a charger. The battery pack can be changed while the sensor is on the net.

The Mantis provides a picture of fish coming into the trawl and detects if the footgear leaves bottom. The system 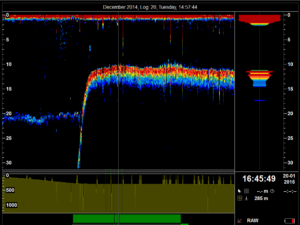 offers the highest resolution on the market at 640 lines. Sensor depth is incorporated to allow the skipper to adjust trawl position. The Mantis can be used as a standalone unit or incorporated in the Notus Trawlmaster system.

Systems have already been installed in: Canada, the USA, Brazil, Spain and Peru.